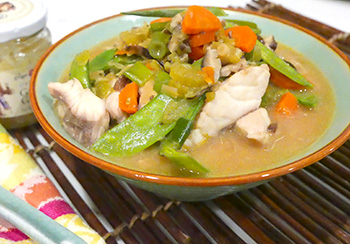 This is another recipe that was inspired by a basket of ingredients given to me by my brother's family for Christmas.

The basket contained the rice noodles. These are common and I have posted a fair number of recipes on the Dr. Gourmet Web site using rice noodles. I love them because they are so easy to cook: the noodles take all of about five minutes in boiling water. They also make a great vehicle for so many terrific flavors. (Note that we do particularly like the Annie Chun's brand brown rice version because they contain more fiber.)

Also in the basket was a jar of grated ginger from a company called The Ginger People. The flavor of this product is great, with a both sweet and savory taste - kind of a cross between candied ginger and the flavor you get when ginger is in Asian dishes.

The first few tries didn't go so well. I started the soup with the sesame oil and added the grated ginger. I didn't realize how much water is in the ginger until it started crackling and spitting in the pan. Cooking the ginger in the pan first and then adding the oil so that the other veggies could be cooked worked well, but the finished soup had only a whiff of ginger flavor so it was back to the drawing board.

The only way to get the ginger flavor that I was looking for was to use fresh ginger. At the same time the first few passes of the soup had too many veggies and some water that diluted the flavor. I cut out some of the carrots and celery and added the mushrooms, giving this a good earthy flavor. This is the key in making your own great recipe: balancing the flavors of sweet, salty, savory, bitter and tart - in this case carrots, soy sauce, mushrooms and stock, snap peas, and ginger. Each of these complements each other. The result is a great filling and warming soup.

The grated ginger isn't in the recipe above, but I did use it as a garnish for the soup and it was fantastic, bringing more depth to the soup with the sweet and savory flavor of the ginger.