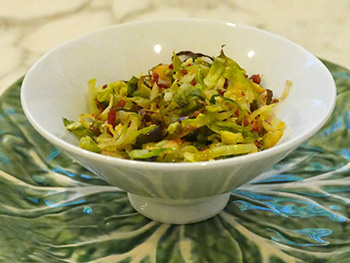 Last Monday was the first week of the 2017 Christmas Challenge and this recipe comes from the basket of ingredients that my brother gave me that included some Busseto Robusto Spicy Dry Salami. While I will occasionally eat cured meats, I don't very often because of the amount of salt. An ounce usually contains about 350 milligrams of sodium, and that adds up since an ounce is not a lot of meat. The Busseto is even higher at 500 milligrams per ounce. That's a lot and tasting this it is indeed spicy along with all that salt.

I figured that it would be good to dice this and use it in some dishes here and there to add both a salami and a spicy flavor (along with all that salt).

First up were some Brussels sprouts. Why Brussels sprouts? Because I spotted some great-looking fresh sprouts in the store, and they need a bit more salt when you cook them to bring out their flavor. I thought this would work really well. The first pass wasn't very good. I cut the salami into small dice - about 1/4 inch - and then cooked over medium high heat in a large skillet. As I expected, it rendered a lot of fat as the meat crisped up. I had preheated the oven to 325°F and after adding the stemmed and quartered Brussels sprouts to the pan and tossing, I placed it in the oven. The first version was not salty enough and a bit dry. After adding more salt and a little bit of olive oil, however, it wasn't very good either. Each bite was a bit of plain-tasting brussels sprouts punctuated by the spicy, salty salami. Good, but it didn't mix the salami and sprouts flavors together as evenly as I would like.

After thinking about this it seemed that shredding the Brussels sprouts would work. There are a few shredded Brussels sprouts recipes on the Dr. Gourmet website, and the texture and flavor is amazing. The more I thought about it, the more it seemed that finely mincing the salami first would help distribute the flavor really well.

A note on shredding Brussels sprouts. I slice these thinly crosswise, starting at the crown of each sprout and cutting toward the stem. After slicing you can steam or cook them, but I prefer to take an extra 5 minutes and sort through the shreds to pull out the tough stems. This is generally about one or two slices at the bottom of the sprout and the texture of the finished dish is better (in my opinion).

After rendering the minced salami, there was more oil in the pan than with the dice and that took all of about 10 minutes. Adding the shredded Brussels sprouts, tossing and roasting in the oven for another 10 minutes and the result (Spicy Shredded Brussels Sprouts) is great. Sweet, salty, spicy, and umami all in one.