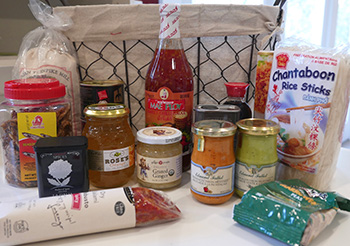 I love my brother Bruce. We have been business partners for over 15 years and friends for slightly longer than that. He's 6 years older than I am and has been really successful in his profession winning multiple Emmys and being honored for his work in television. He has traveled with presidents and titans of business. He married well with an amazing, accomplished wife and two super-bright daughters. He has been a tireless supporter of Dr. Gourmet. He's a lovely guy.

We talk about food on the telephone often. He's cooking this or that and wants to share ideas, flavors, and ask my advice. Most of my sharing is done in these Web pages with him and with you, week in and week out, and he has offered me some of the best critiques of anyone across these decades.

For Christmas this year he and his daughters (both great foodies) bought me a basket of ingredients. You can tell that they put a lot of thought into their choices with the brief that I was to cook with them a la "Chopped."

So in the coming weeks (and maybe months) I will be bringing you recipes and comments on what works, and more importantly, what doesn't. You see, for over 15 years now I have been writing and posting recipes and am happy with every one of them. There are some that are better than others and many of them I adore. I have been creating two to three brand new recipes for the Dr. Gourmet website every single week since 2001. You get to see the finished product but not the process - what works well the first time (more often now than it used to be), what requires a few passes to get the dish right, and even more importantly, what is an absolute failure (less often now that it used to be).

And the Christmas basket makes a great way to do this because often it is a single ingredient or flavor that inspires me. And there are a few odd ingredients in this basket....

Normally, I don't cook with many sauces, such as the mustards or chili sauce, because I prefer to cook from scratch, but this is something that should be great for Dr. Gourmet readers because there is a lot of value in such convenience. Of note, there are always two sauces in my house - a low sodium Asian peanut sauce and Pickapeppa (more on Pickapeppa later). I expect that some of these might be super simple - the tarragon mustard tastes great and might work well simply smeared on salmon and broiled or the La Dalia spice cooked into Arborio rice on its own. Others will be tough.

And to that last statement I say to my brother and my nieces: "Black treacle? Really? OK, game on."