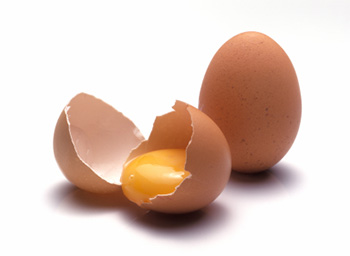 OK, it might seem obvious that you should always have eggs on hand, but they really are one of the most versatile ingredients and they keep quite well (here's the US Department of Health and Human Service's Food Safety guide for keeping eggs.)

Eggs have gotten a really bad rap in the last 40 years. The idea that they were harmful because they are high in cholesterol wasn't even faulty science: in most cases there wasn't a lot of science involved in the recommendation to limit dietary cholesterol. We now know that dietary cholesterol isn't a major health issue for most folks, so having them on hand for a quick meal makes sense.

Much of the evidence showing eggs to be safe has come out in just the last several years. For example, in a large study of 21,000 physicians those eating up to 6 eggs per week saw no increase in their risk of heart failure. There was an increased risk of 28% in those eating an egg every day (or 7 or more per week). Those consuming 2 or more eggs per day (14 per week) did have a dramatic increase in risk of 64%.  So like most foods, too much of any ingredient is. . . too much. The good thing about this study, however, was that there was no difference in the participants' cholesterol levels, including total cholesterol, HDL, or LDL. (Djoussé, L. & Gaziano, J. M. Egg consumption and risk of heart failure in the Physicians' Health Study. Circulation 117, 512-516, 2008)

Another study of 152 overweight or obese men and women had half of the participants eat 2 eggs for breakfast and the other half eat the same number of calories in a bagel breakfast. In both groups there were instructions in reducing calories and in the group who had eggs for breakfast tended to lose 65% more weight than those who had bagels for breakfast. They also reduced their Body Mass Index by an additional 61% over the bagel breakfasters, while also seeing a 34% greater reduction in their waist circumference. (Vander Wal JS, Gupta A, Khosla P, Dhurandhar NV. Egg breakfast enhances weight loss. Int J Obes (Lond). 2008;32(10):1545-1551. doi:10.1038/ijo.2008.130)

Again, in this study there was no significant difference in cholesterol levels between the bagel group and the egg group, regardless of whether they were reducing their total caloric intake or not.

In a 20 year study out of Finland, 2,300 men were followed over 20 years and researchers looked at those who ate less than 1 medium egg per week vs. men consuming at least 3 1/2 to 4 eggs per week. The higher egg group was 37% less likely to develop type 2 diabetes. Even better, when looking at the participants' total cholesterol intake from all sources, researchers found (again) no links between dietary cholesterol and diabetes risk. (Virtanen JK, Mursu J, Tuomainen TP, Virtanen HE, Voutilainen S. Egg consumption and risk of incident type 2 diabetes in men: the Kuopio Ischaemic Heart Disease Risk Factor Study. Am J Clin Nutr. 2015;101(5):1088-1096. doi:10.3945/ajcn.114.104109)

There are other studies to support the idea that eggs are not a problem, but you get the idea. So keep a dozen eggs on hand. They're not just for breakfast: egg dishes make terrific light dinners and recipes like frittatas, quiches, or omelets make great lunches to take to work.