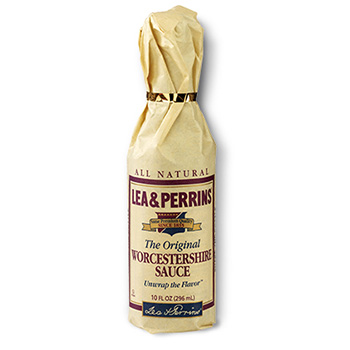 Worcestershire is not one of those ingredients that is foundational like onions, mushrooms, or tomato paste. It is, however, one of the best products to have on hand that, used thoughtfully, can make a big difference in almost any dish.

There are a lot of a great stories behind the origin of Worcestershire sauce. The one that we do know is that John Wheeley and William Henry Perrins began experimenting with sauces in their pharmacy. It may be that the idea for the recipe came from Lord Sandys - or possibly Lady Sandys - after their return from East Asia and found its way into the hands of Lea and Perrins. The chemists first attempt at replicating the recipe was, however, a failure, and deemed too strong of flavor to be edible. Allegedly they came across the sauce years later in the basement of their shop and found the fermented sauce to be delicious. In 1838 the first bottles of Lea & Perrins Worcestershire sauce was relesed to the public.

Why should you keep it on hand? Simple.

The sauce is made with vinegar, molasses, cloves, anchovies, tamarind, chili peppers, shallots, garlic and onion among other things. The combination is balanced with sweet, salty and some tart flavors but it is the umami that really comes through and adds a lot to your dishes. The best part is that with all that flavor it is low in salt - a teaspoon contains only 65 milligrams of sodium. The fact is that Worcestershire sauce tastes a lot more salty than it is.

But it is the umami flavor that really comes through in the sauce and just a bit will enhance almost any dish. When I say "just a bit" it is important for you add Worcestershire to your recipes carefully and measure each teaspoon. Too much can easily ruin a dish and there is a fine line between too little, just right and too much.

There is a legend that Caesar Cardini's original Caesar Salad recipe used anchovies in the dressing. In numerous reports, including a 1987 interview with Cardini's daughter, it is clear that the umami flavor in Caesar Salad dressing comes from Worcestershire sauce and not anchovies (along with the parmesan cheese). It is the anchovy flavor in Worcestershire that imparts a lot of the savory, umami taste.

A good rule of thumb is to start with 1/4 teaspoon per serving: a recipe that serves four will need about 1 teaspoon to ramp up the umami flavor in the dish. You can add more - a teaspoon at a time - but don't be in a rush. A little goes a long way. If the dish already has strong flavors you might need a bit more (or none at all) but delicate dishes like eggs can easily be overpowered by adding too much.

Here are some recipes that use Worcestershire to give you some guidance on using it as a subtle but important flavor enhancer.