In Praise of Brown Rice 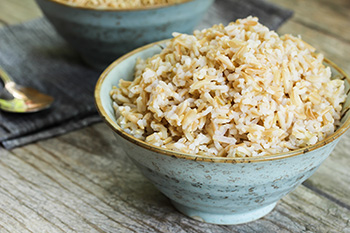 I was talking about rice with a chef friend recently and the subject of how much I like risotto came up. This led to the discussion of white rice vs. brown rice and the health benefits of the latter. I had mentioned that the one place that I still use white rice is in risottos.

There is no doubt that consuming brown rice is better for you, and most folks assume that it is because of the higher fiber. That’s important, but it does appear that there is more to it. There is more fiber in brown rice, because to make white rice the bran and hull are stripped away, leaving only the endosperm. This means that there is almost 4 times as much fiber in brown rice than white rice. Milling the brown rice to make white rice strips away not only the fiber, but also B Vitamins, iron, phosphorous, potassium, zinc, and magnesium. There is a small amount of rice bran oil lost as well.

The trade-off is that white rice is easier to cook and will last longer on the shelf, because the bran and oil in brown rice will turn rancid more quickly. Brown rice takes much longer to cook because the boiling water has to penetrate the bran layer before the endosperm (the white rice inside) can cook.

Arborio rice has a higher starch content than long grain rice, and as the rice cooks the starch releases and adds to the creaminess of the dish we call risotto. Most short grain rice offers similar properties: the rice used to make sushi is short grain, for example. My friend contended that using a short grain brown rice would have a similar creamy effect as short grain white rice but that it would take longer to cook.

He’s right. It does take longer - a lot longer. And the risotto is not quite as creamy - but it is very close. Risotto made with Arborio takes about 20 minutes or so, and using short grain brown rice takes at least twice that and much more water. When you compare this version to the original Leek Risotto with Toasted Pumpkin Seeds made with white arborio, there is a change in character because the vegetables, such as onions, leeks, mushrooms, and the like, will be cooked much longer. On the one hand that means more breakdown of the veggies, but using the brown rice gives it a great nutty flavor. Stirring Arborio is key to helping to create the creaminess, and this is even more true using the short grain brown rice.

I have preferred brown rice for almost 30 years and love it even more now.