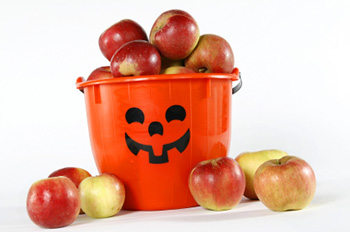 Halloween's coming up and there's always discussion about healthy alternatives to all that candy given out during Trick or Treating.

When I was a kid there was a family down the street that always gave apples.  It was a popular stop, as the mother had a terrific act. She would dress up in a dramatic witch costume and hand out "magical" apples. Sometimes getting us to eat better is just in how the message is delivered!

About 10 years ago I lived next door to a woman who gave money to the Trick or Treaters. She would save up her spare change through the year and doled out about 30 - 35 cents for each kid (about the cost of a candy bar).  The kids were always delighted at this, even more so than getting actual candy.  I do this now and love the squeals of "Mooomm, I got money!" almost every time.

If you'd like to have healthier choices at your Halloween parties, trail mix is a great way to go. Choose the ones with a mixture of nuts, seeds and dried fruits and avoid the mixes that contain candies like M&Ms. It's less expensive to purchase in bulk at a Whole Foods or a natural foods market and bag them yourself. Making your own trail mix is easy: just mix about 1/2 nuts or seeds to 1/2 dried fruits. Choose peanuts, pumpkin seeds, sunflower seeds and slivered almonds along with raisins (regular and golden), cranberries, dried apricots and pineapple.

Small boxes of raisins are also a great choice. Kids generally love them and there's nothing better than dried fruit.

When you're handing out candy, the best choice for your kids and others coming to the front door is to remember that smaller is better. Your guide should first and foremost be calories. Select candies that are less calorie dense. Starburst Fruit Chews are small, have only 20 calories and each one takes a longer time to open, slowing down snacking. Another good choice along this line is Hershey's Kisses. They're only 25 calories each.

Other similar choices are Smarties, Tootsie Rolls, Jolly Ranchers and small lollipops like Dum Dums. While these all have sugar and are candy, it's important to remember that it is Halloween and there is a time and a place for such treats. It's a good opportunity for a teaching moment with kids to let them know about making choices and finding moderation. Talk about all of this in advance and discuss portioning of their booty to be eaten over time. Putting the snacks in small ziplock bags for them and handing them out gradually prolongs the magic of the holiday but also helps teach restraint.

Speaking of chocolate, we know that it's really good for us and that dark chocolates are higher in antioxidants. They can be more expensive but choosing something like Ghirardelli intense chocolate squares are great quality and they're higher in flavonoids and antioxidants than milk chocolate (a single square is 50 calories).

There's such great research that shows when we don't have snacks around tempting us we're much less likely to eat more. This is a challenge at Halloween because the temptations are everywhere. Not only are treats available because we've bought them in preparation for Trick or Treaters, but they are there afterwards as well. Even at work this is an issue because folks will often bring in candy as part of decorating for the holiday and then there's more after the fact. Get the snacks out of the way by portioning them, putting them in the cupboard where they're not a constant temptation, or even giving them away.

Again, it’s important to remember that there’s a time and place for healthy snacking and Halloween is one of them. With a little planning you can have your Smarties and eat them too.