There are thousands of varieties of tomatoes and a look at any seed catalogue always makes my mouth water. I love some of the names -- Isis Candy, Cupid, Tiny Totem, Snowberry.... Not many of these make it to the markets, however.

Buying tomatoes at the supermarket can be a daunting task. The quality is often poor because most are picked green and ripened in big rooms using ethylene gas. Even so, even the worst tomato can be made better by placing it stem side down on a sunny windowsill. It will continue to ripen further and if you want it chilled, place it in the fridge for only a couple of hours, as cold is the enemy of the tomato. 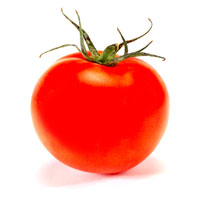 Canned tomatoes are a fantastic product because it means that fairly good tomatoes are available to you year round, for sauces, stews, chilies and such. Experiment with different brands to find a quality product that you like. My favorite brand is Muir Glen Organic tomatoes. They are consistently bright red and flavorful. You can buy whole peeled or not peeled or crushed, etc.. A 15 ounce can of tomatoes is about 1 1/2 cups of chopped tomatoes.

Plum Tomatoes are sometimes called paste tomatoes. These are slightly elongated, oval tomatoes and are very common year ‘round in most markets. Chosen carefully they are a good all-purpose tomato for salads or cooking.

Plum tomatoes were traditionally bred for sauce and canning purposes. Because they generally have only two seed compartments, there is a higher ratio of solid to liquid, making them excellent for cooking in sauces. Really fresh ones are great in salads, however, because of the fewer seeds.

Growers like them because they travel longer distances better than larger tomatoes. As a result the texture can be slightly mealy. Since they are so hardy you may find them to be fresher tasting during the off season when other tomatoes are simply not edible. They are often labeled in the grocery as Roma Tomatoes, as this is the most common variety (although they might actually be another plum tomato variety, the San Marzano). 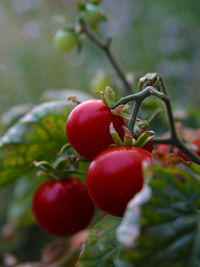 Interestingly, the lovely, sweet, succulent grape tomato is actually a small version of the plum tomato. These are often about the same price per pound and make a great choice for sauces, especially in the dead of winter when other tomatoes are just too sad looking to take home.

The round tomato that is most common is usually referred to as the slicing or globe tomato by grocers. There are a wide variety and you’ll have to choose carefully in the store. As most are not fully ripe, it’s best to plan ahead.

Your grocer thinks of the ripening process as starting with green and then moving to the breaker stage (less than 10% red across the surface). They then advance through turning (10% - 30%), pink (30% +), light red (60% - 90%) and finally red stage(red color over 90% of the surface). Most of what you will find in the grocery is at the light red stage.

Big beefsteak or big boy tomatoes are a couple of my favorites. You’re not likely to see these at the supermarket but at farmer’s markets or roadside stands. Larger -- up to 3 or 4 inches in diameter -- they make the perfect sandwich tomato.

Cherry tomatoes are usually about an inch in diameter but can be as large as a golf ball. They are a variety of round tomato in their own right and not simply tomatoes picked younger. I like them because, like grape tomatoes, they often have a bright tomato flavor year round and are seldom mealy. They are now cultivated in both red and yellow varieties. 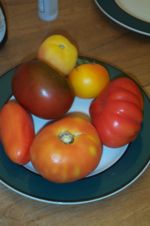 Heirloom Tomatoes have become very popular. These are grown from heirloom or antique seeds and were originally only available at local farmers markets and specialty grocers. Now grown in larger quantities, they are usually superior because the strains are chosen for flavor and not hardiness.

Most growers of heirloom tomatoes are invested in creating a quality product. You won’t often find them in regular grocery stores since they generally move directly from grower to market (and are not gassed as most other tomatoes are).