Prevent stomach cancer by drinking green tea
Tea is great for you. Like coffee, tea (whether green or black) is a fantastic source of antioxidants, which help reduce your risk of many chronic diseases, from diabetes, to heart disease to cancer. In women, higher intake of black tea has been linked with reduced risk of ovarian cancer, specifically, while a study in China showed that drinking 5 or more cups of green tea per day reduced the risk of all-cause mortality by as much as 31%.

Coffee, Tea and Brain Tumors
Brain tumors make great television, but the truth is that they're pretty rare: the risk of developing a brain or nervous system tumor of any kind are between 4 and 8 per 100,000 person-years. Since they're so rare, there's very little opportunity for studying prevention. A group of European researchers noted that a study in the United States had suggested that there was an inverse relationship between coffee and tea intake and the risk of glioma, a tumor that most often arises in the brain (although it does sometimes appear in the spinal cord). 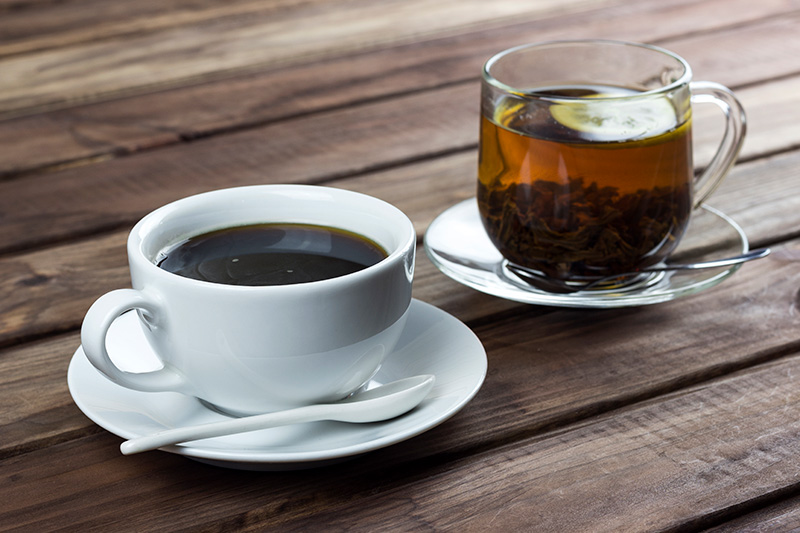 One of the most-repeated pieces of health advice we give is about what to drink: water, tea, or coffee as opposed to fruit juices, sodas, or "energy drinks".

(Yes, alcohol is part of a Mediterranean-style diet, but we are talking about what you drink most of the time, not what you have in moderation with dinner.)

The question often is, which is better - tea? or coffee?

An ongoing, prospective study known as the UK Biobank recruited participants in England, Scotland, and Wales between 2006 and 2010. At the start of the study, along with demographic, dietary, and health information, the participants estimated their weekly intake of coffee and tea, further specifying whether these were certain types: ground, instant, green vs. black, etc. (PLOS Med 18(11):e1003830)

The participants were contacted regularly through 2020, at which time the authors of this study determined which, if any, of the participants had been diagnosed with stroke (alone), dementia (alone), or post-stroke dementia (any type of dementia specifically experienced after a stroke).

After excluding participants who were under 50 years of age at the start of the study as well as those who had already been diagnosed with stroke or dementia, there were over 365,000 participants in the study.

Using inpatient health records from England, Scotland, and Wales, the authors could track which participants were diagnosed with stroke (ischemic stroke or hemorrhaghic stroke), dementia (Alzheimer's or vascular dementia), and outcomes related to both.

The authors took into account demographic variables (age, sex, ethnicity, education) as well as education level, income, rates of smoking or drinking alcohol, intake of sugar-sweetened beverages, clinical history, and diet as well as use of diabetes medications or high blood pressure medications.

In this group, almost 21% of participants did not drink coffee while nearly 14% did not drink tea. Just over 16% reported that they drank between 1/2 and 1 cup of coffee per day and at least 4 cups of tea per day, while a little over 12% said they drank equal amounts of coffee and tea per day: 2-3 cups each.

Compared to those who did not drink tea at all, those who drank 2-4 cups of tea per day were about 16% less likely to experience a stroke. (These results were limited to ischemic but not hemorrhagic stroke.) Yet tea intake was not seem to affect risk of dementia of any type.

Compared with those who drank neither coffee nor tea, those who drank 2-3 cups each per day were 32% less likely to experience a stroke, those who drank at least half a cup to 1 cup of coffee per day as well as 2-3 cups of tea per day saw their risk of poststroke dementia fall by 50% although no effect was seen on vascular dementia or Alzheimer's.

For the various types of coffee, from decaffeinated to instant, to ground coffee, the authors note that on the whole, drinking coffee made from ground, caffeinated beans appeared to be more protective than decaf or instant.

The basic advice still applies: your best choice of everyday beverage is water, followed by coffee (regular or decaf) and tea (regular or decaf). This study suggests that drinking both might be more protective than one or the other: perhaps coffee at breakfast and iced tea at other meals, with water in-between.