Women more at risk from highly-processed foods
If you're reading this article it's unlikely to be news to you that processed foods not only help you gain weight as well as contributing to your risk of colon and rectal cancers, but they also help you age faster on a cellular level.

Processed meats and colorectal cancers
If you've been reading these Health & Nutrition Bites for a while, you've likely heard about the risks of processed meats. Today's research is a review and meta-analysis of multiple prospective studies that simply adds more fuel to the metaphorical fire.

More vegetables, less meat: it can be done in restaurants
...it would be naive in the extreme to think that home cooking alone will reverse the rise in obesity and the attendant increase in chronic health issues. The fact is that people eat out - and in the United States, at least, they eat out a lot.

A look into the risks of land animal protein 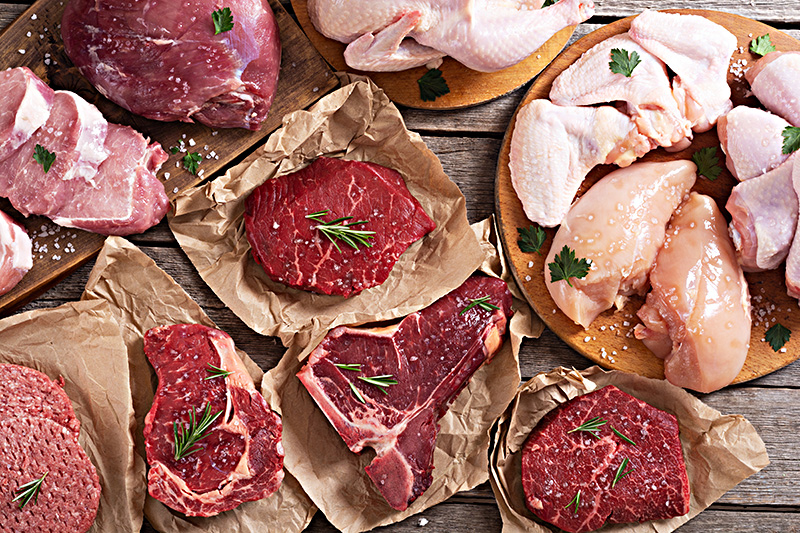 Earlier this year we shared with you a study funded by the beef industry that showed that those who consumed a Mediterranean-style diet that included 2.5 ounces of lean beef per day saw improved cholesterol scores over those following an "Average American Diet."

We noted at the time that this wasn't news: a Mediterranean-style diet allows up to 3.25 ounces of lean land animal protein per day, on average. So all this study did was emphasize that yes, beef, a land animal protein, can be part of a healthy diet.

Today's research is not limited to beef (that is, meat from cows): it looks at all land animal protein: beef, veal, mutton (sheep), pork, and poultry (flesh from all birds), as well as processed meats, defined as "meat that had been salted, cured, or treated with perservatives and/or food additives" (Am J Clin Nutr 2021;114:1049-1058).

This prospective study made use of data gathered for the PURE (Prospective Urban Rural Epidemiology) Study, which began recruitment in 2003. This analysis includes nearly 135,000 people from 21 low-income, middle-income, and high-income countries on 5 continents. (Participants with known cardiovascular disease were excluded from this analysis.)

At the start of the study participants responded to detailed dietary questionnaires that had been designed specifically for their country of residence (and in some cases the region of their country), listing common as well as regional foods in local serving sizes. The participants indicated how often, from "never" to "over 6 times per day" they consumed each food.

The authors then standardized the participants' meat intake by multiplying the local portion size by frequency of consumption and converting to an average of grams consumed per week. The percentage of calories consumed in the form of land animal proteins was then adjusted to a standard of 1,000 calories per day in order to account for varying total caloric intake.

Bearing in mind that meat is a comparatively expensive food item, in their analysis the authors also took into account participants' education level as well as comparative wealth, calculated by identifying utilities and household possessions such as electricity, car, computer, television, phone, and other material goods and conducting a components analysis to create a wealth index.

In nearly 135,000 people followed over an average of 9.5 years, when comparing those who consumed the most red meat with those who did not eat red meat, the authors found no association between higher consumption of unprocessed red meat and any of the aforementioned conditions.

The same held true for poultry consumption, but processed meat was another matter entirely.

150 grams is about 5.3 ounces. That's like having sausage or bacon every day at breakfast or eating a daily sandwich made with lunchmeats full of nitrates.

While no prospective study can prove causality alone, this adds to our understanding of the risks of processed meats. Save the bacon and sausage for an occasional treat, and make your sandwiches with whole grain bread and use a small amount of leftover pork tenderloin, chicken breast or thigh, or lean beef. Pile that sandwich high with veggies and you'll easily be adding at least 2 points to your Mediterranean Diet score.