Vegetarian/vegan diets may increase risk of fracture
Quite a large portion of the nutrition world would like you to believe that a vegan diet is the "best" diet for your health. The truth is that the jury is still out: In 2019 I shared with you a prospective study that suggested that suggested that vegetarians and vegans were more likely to have a stroke than those who ate land animal protein.

Should you go vegetarian or vegan for your heart?
At almost every talk I give, somebody asks me about a vegan diet. Shouldn't we be telling our patients to go vegan, given the evidence against red meat in particular and animal protein in general?

Is a vegetarian or vegan diet right for kids? 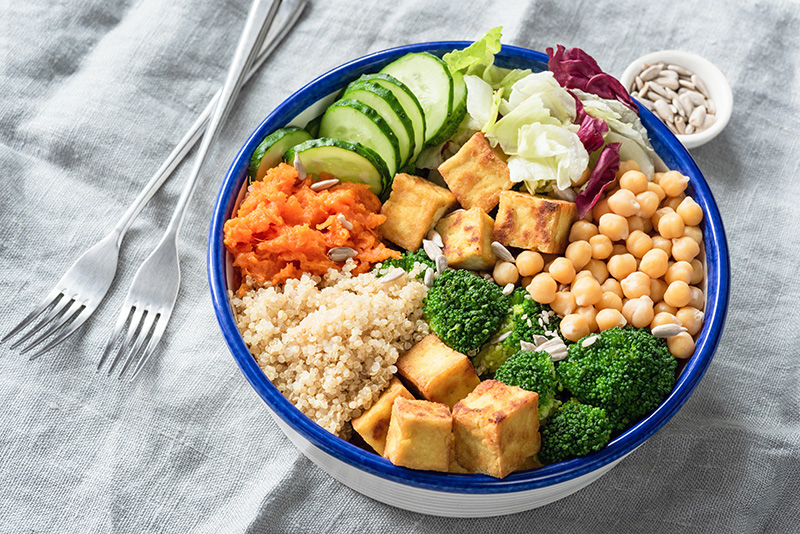 While on the one hand there's evidence that those adults who prefer a vegetarian (lacto-ovo) or vegan (no animal products whatsoever) diet often have better markers of cardiovascular risk, from cholesterol scores to blood pressure, we also know that without supplementation, those who follow strictly vegan diets are at much higher risk of deficiencies in iron, B-12, and overall bone mineral density.

Scientists in Poland noted that it would be "unethical and unfeasible" to pursue a randomized, controlled trial in children to assess the effects of vegetarian vs. vegan vs. omnivore diets: it would require that the children follow these diets for years before results could be assessed (Am J Clin Nutr 2021;113:1565-1577). What if there were long-term health risks?

Instead, for this study the authors targeted their recruiting with social media to vegan, vegetarian, or omnivore parents with children between the ages of 5 and 10 years old. Over a two-year period the authors recruited 63 vegetarian, 52 vegan, and 72 omnivore children of matched age groups.

To verify the children's diets, the authors required that the parents complete detailed food diaries for 4 consecutive days, including 2 weekend days, and interviewed the parents regarding the family's dietary practices over the last several years. Thus the children could be accurately classified into vegan (no or nearly no [<5% of calories] flesh foods or animal-based products), vegetarian (consuming eggs or dairy at least once per month but animal protein less than once per month), or omnivore (no dietary restrictions). Pescatarians or semi-vegetarians were excluded.

The children were weighed and their height measured; their body fat was tested by trained professionals using calipers; their blood was drawn for cholesterol testing; their lean body mass was measured using an indirect, non-invasive but accurate process; and their bone mineral content (BMC) was measured using sophisticated x-rays.

The authors used the children classified as omnivores for their control group and compared their cholesterol, BMC, body fat, height, and weight scores with those of the age-matched vegetarians and vegans.

After taking into account other variables such as parental education, with respect to height the omnivores and vegetarians scored about the same. Vegans, however, tended to be shorter than both vegetarians and omnivores by as much as about 3 centimeters (about 1.2 inches).

More concerning was measures of B-12. This vitamin in particular is known to be deficient in vegan diets, and dietary best practices recommend that vegans take dietary supplements as well as making sure they consume foods fortified with B-12.

After blood tests, the authors found that 13% of vegan children were likely to be deficient in B-12 and that 40% of vegan children were at risk of deficiency. Vegetarians, on the other hand, were likely to be deficient or at risk at 4% and 19%, respectively. Those vegans who were given B-12 supplements as well as consuming foods enriched with B-12 had similar B-12 scores as omnivores, while vegetarian children only needed to consume foods enriched with B-12 in order to match omnivore children.

It's clear that choosing to avoid animal products may put your child at risk, but these risks may be decreased or avoided if you approach their diet with great care and attention. If you wish to raise your child as a vegetarian or vegan, they will be best served by a parent who works closely with the child's pediatrician - as well as a dietitian if needed - to make sure your child receives all of the nutrients they need for optimum development.