Mediterranean diet easier to stick to than intermittent fasting, Paleo
Sometimes I have to wonder why a study is published at all. A study published recently in the American Journal of Clinical Nutrition has basically proven what we already know,

The 5:2 diet - intermittent fasting - debunked
One of the more recent diet fads is known as "intermittent fasting": its advocates say that consuming a very-low-calorie diet on a few days per week, while consuming a normal, or even higher number of calories on other days of the week, results in greater weight loss. Some go so far as to claim that such a diet improves metabolic factors such as insulin levels and amounts of abdominal fat. 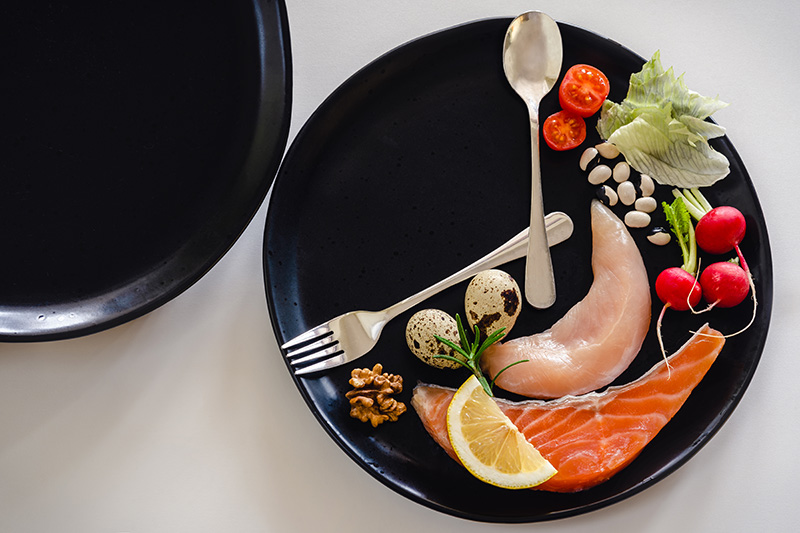 In 2018, a German study with 136 participants that lasted a total of 50 weeks (12 weeks of active intervention) compared three arms of a weight loss study: one group that followed a 5:2 intermittent fasting diet with 5 days of usual caloric consumption and 2 days of 25% of caloric consumption; one group that reduced its daily calories by 20% each day (on average consuming about the same number of calories as those in the intermittent fasting group); and a third, control group of those who continued their usual diets. Those who cut calories by any means - by intermittent fasting or just cutting daily calories - lost weight, with the difference between the two calorie restriction groups being only "borderline significant", statistically speaking.

In 2020 I reported on a 12-week study in over 100 overweight or obese men and women who were randomly assigned to a Time-Restricted Eating group - eating only between noon and 8pm - or a control group. Neither group was instructed to limit their caloric consumption. Those who restricted when they ate lost a little more weight than those who did not, but not only was that difference not statistically significant, those who restricted when they ate lost more muscle mass than those who ate regular meals (and snacks, when desired).

In a study performed in Brazil (Nutrition 2020:110796), 58 women with an average age of about 31 and an average Body Mass Index of 33 (clinically obese) took part in a short-term diet designed to reduce caloric intake for just 21 days. Each participant had their resting metabolic rate and their usual levels of activity measured to identify their baseline caloric consumption.

Their diet plans were designed by dietitians to make use of ingredients the participants were already accustomed to eating. Each participant's caloric intake was cut by an appropriate amount to induce slow but steady weight loss - again, as customized for each participant's weight and level of activity - and participants met with dietitians weekly to help plan meals and identify the appropriate number of calories they should be consuming each week.

The participants took part in the low-calorie diets for 21 days but returned to have their weight and waist circumference measured regularly for 81 days.

The outcome: There was no statistically significant difference in the amount of body weight lost between those who limited when they ate (the Intermittent Fasting [IF] group) and the control group, who cut calories but ate at their usual times. The only difference the researchers could find between the two groups after the 81 days of the trial was that the IF group reduced their body fat by 0.68% (about 1.36 pounds in a 200-pound person) while the control group lost 0.07% of their body weight in fat, and the IF group lost more waist circumference than the control group: 2.75% compared to 2.2% (the difference, for someone with a 34-inch waist at the start of the study, would be 0.935 inches lost versus 0.748 inches lost).

No other differences were seen between the two groups with respect to levels of hunger, how difficult their respective diets were to follow, gut or thyroid hormone levels, and insulin sensitivity.

This is a small study to begin with and the differences between the two groups - both of whom, we must recall, cut calories to the same degree - are not large enough to be convincing one way or the other. Moreover, those in this study who were instructed to fast for 12 hours per day could, if they chose, simply avoid eating for 12 hours after their evening meal - essentially skipping breakfast (or simply eating breakfast a little later than usual).

In a direct comparison between reducing calories in the usual way and reducing the same portion of calories while also restricting when you eat, I'm seeing no convincing difference.