Age faster with processed meats
I've written in numerous Health & Nutrition Bites about telomeres, the DNA sequences that are considered markers of cellular aging (read a broader explanation of their function).

Is meat bad for you?
Red meat is not bad for you. Bologna is bad for you. Not a little bad, but a lot bad, and this holds true for most processed meats. Eating hamburger is OK, pork chops not bad, chicken is fine, but not most deli meats. 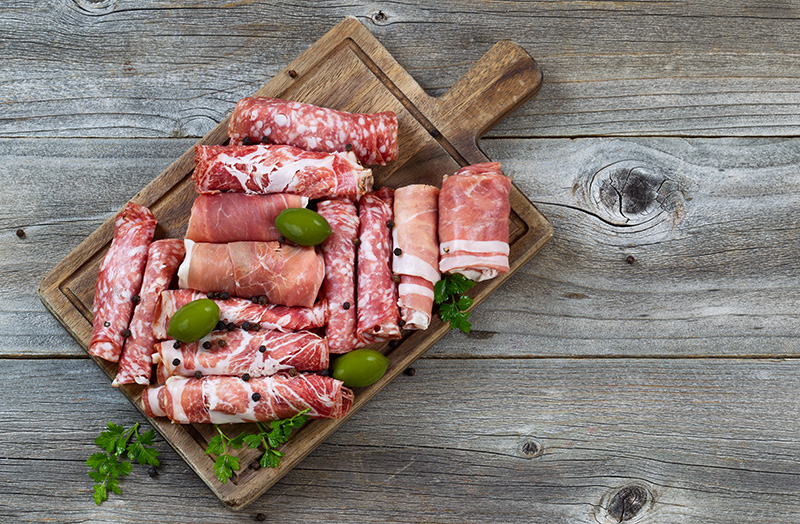 A little over a year ago I reported on a prospective study out of the UK that showed that those who ate as little as 7 ounces of processed meats per week increased their risk of colorectal cancer by 19% compared to those who ate just an ounce per week.

Seven ounces is about 2 breakfast sausage links per day or an ounce of bologna on your sandwich every day.

If you've been reading these Health & Nutrition Bites for a while, you've likely heard about the risks of processed meats. Today's research is a review and meta-analysis of multiple prospective studies that simply adds more fuel to the metaphorical fire.

An international team of researchers collaborated on the review of 17 "nonoverlapping independent" studies, the results of each were published between 2011 and 2017 (Eur J Clin Nutr 2020;74:1132-1148). The studies included as few as 639 people up to as many as 494,000, with most including participants in the tens of thousands.

The studies measured processed meat consumption in the participants and assessed the participants' risk of various colorectal cancers with respect to their intake of processed meats, comparing the lowest intake to the highest. Studies that included those with pre-existing conditions, such as diabetes, were not included in the authors' analysis.

For the purposes of their meta-analysis, the authors defined "processed meat" to mean "red or white meat that has undergone some form of preservation or processing (e.g. smoking fermentation, salting, baking, sterilization)", which for their purposes included "common processed meat items" such as bacon or other cured meats, ham, cold cuts/luncheon meats, and hamburgers.

The amount of processed meats the participants consumed was also standardized into grams per day, with a single portion defined as 50 grams.

More to the point, when the authors analyzed the participants' intake by the number of portions consumed per day, they found that each additional portion of processed meats men consumed increased their risk of colon cancer by 23% - but only for men in Europe and the United States. Similarly, a greater risk of rectal cancer in both men and women was seen in studies performed in the United States - but not in Asian-Pacific regions or Europe.

The evidence continues to grow that processed meats increase your risk of cancers of the colon and rectum. The differing results among populations in Europe, Asian-Pacific regions, and the United States may have to do with the types of processed meats most commonly consumed in each region, but at this point we are still only looking at associations and not definite causes. This is still yet another good reason to keep your consumption of processed meats to that of a (very) occasional treat at the most.