More vegetables, less meat: it can be done in restaurants
One of my goals with both Dr. Gourmet and Health meets Food: the Culinary Medicine Curriculum is to encourage people to get back into the kitchen and learn how to cook for themselves. I think you'll agree that it's an admirable goal, but it would be naive in the extreme to think that home cooking alone will reverse the rise in obesity and the attendant increase in chronic health issues. The fact is that people eat out - and in the United States, at least, they eat out a lot.

Red Meat and Breast Cancer in Women
There have been links to an increased risk of cancer in those who eat higher amounts of red meat. So far this has not been shown in women with breast cancer, however. In a study published this week a group of researchers looked at a large number of women to determine if this might be the case (Arch Intern Med 2006;166(20):2253-2259). 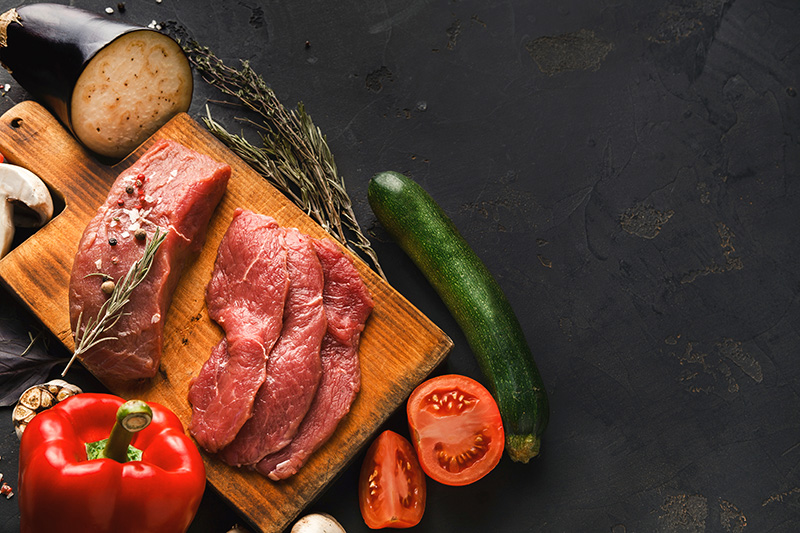 It's a bodybuilding tenet that building muscle requires eating a lot of protein. I can see why it seems to make sense to those who don't understand physiology: to make more muscle, something made of protein, you need more protein, right?

I hope I don't need to tell you that the body doesn't work that way. Whether it's collagen for joints, skin, and hair, or protein for muscle, consuming more of a certain type of tissue doesn't mean your body creates more of that tissue.

Today's article demonstrates that truth with a randomized controlled trial including just over 150 people who were at least 65 years of age - people who are more likely to benefit from increased protein intake (Am J Clin Nutr 2020;112:113-128).

Funded by a grant from Meat and Livestock, Australia Ltd., the authors of the study recruited participants from Melbourne, Australia and surrounding environs who were at least 65, were otherwise free of chronic disease, and were neither actively pursuing resistance training nor otherwise regular exercisers. To participate in the study the participants had to have their physician's clearance to join an exercise program.

For 24 weeks (6 months) the participants exercised three days per week in a personal-trainer-led exercise program that included both aerobic training such as cycling or walking on a treadmill as well as progressive resistance training such as using free weights or exercise machines.

Half of the participants were provided with 220 grams of lean red meat (about 7 3/4 ounces) for them to consume on each of their training days, while on the other four days of the week the participants followed their usual diet.

If it were true that consuming more protein meant building more muscle, those who were consuming that extra lean red meat would have greater muscle mass and would be stronger than those who did not consume that extra protein. Right?

All participants underwent the same ultra-sensitive scans to ascertain their lean mass, fat mass, and muscle density at various points of the body both before the study began and after the 6 months of resistance training. Statistically speaking, there was no significant difference between those who consumed extra protein and those who continued (basically) with their regular diet: both gained about the same amount of muscle mass and strength.

Your body has the amazing ability to build muscle (and fat) out of whatever fuel it is provided. Yes, you should make sure that the calories you consume are of the highest quality - for reasons that go far beyond building muscle. But do you need to consume protein to build muscle? No.

(Meat and Livestock, Australia Ltd. were likely disappointed with this study.)