Fried Chicken
In the last 30 years that I have been writing about food, fried foods have certainly been vilified. Outside of soda, they are the most popular food that everyone focuses on - patients, doctors, dietitians all think of this first when they talk about eating healthier.

Fried Foods and Gestational Diabetes
Need an additional reason to avoid going through the fast food drive through for French fries?

More evidence that fried foods are bad for your heart 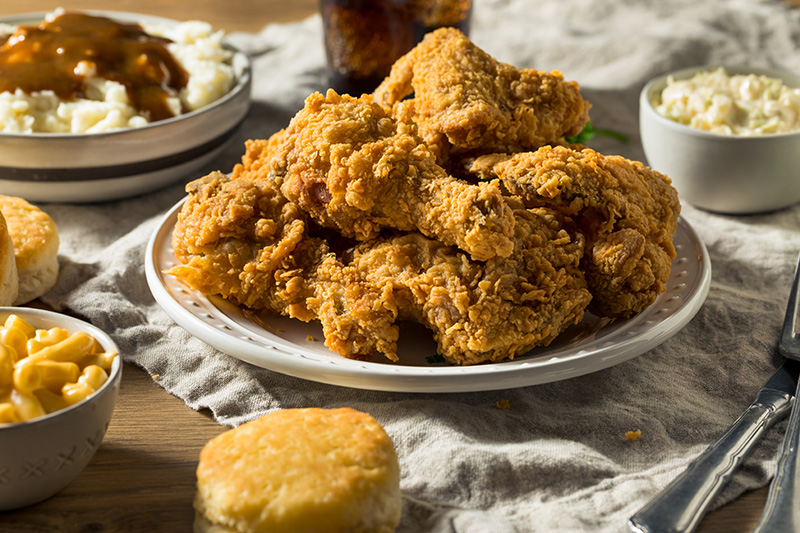 It seems that as with a recent article about acne and dietary habits, deep-fried foods being bad for you is as true as it's been long held to be.

In today's article the authors note that "the nutritional impact of frying depends on the type of fat or oil used as the frying medium" as well as what is being fried and for how long. Either way the food usually ends up higher in calorie density than it would have been if it had not been deep fried. Yet the specific concern regarding fried foods has been its effect on artherosclerosis, the buildup of plaque in the coronary arteries that is also known as Coronary Artery Disease (CAD) and can lead to heart attack or stroke and ultimately death.

The Million Veteran Program (MVP) is an ongoing cohort study among veterans enrolled in the Veterans Health Administration healthcare system. Started in 2011, participants provide a blood sample and complete health and dietary questionnaires and their participation is connected to their use of the VA healthcare system (with informed consent). The authors of this study report that as of 2018 about 650,000 veterans had completed the MVP lifestyle survey, including nutrition data.

For the purposes of this study the authors excluded those veterans whose dietary, lifestyle, and demographic information were incomplete and further excluded those who had already been diagnosed with CAD.

How often the veterans consumed fried food was determined by their responses to just two questions in the dietary questionnaire: first, "How often do you eat food that is fried at home (exclude "Pam"-type spray)?" and second, "How often do you eat fried food away from home (e.g., French fries, fried chicken fried fish)?" These responses were grouped into levels of intake per week.

Over 150,000 veterans, 90% of whom were men, were included in the final analysis, with the authors comparing the fried food intake of those who were diagnosed with CAD after the start of the study with those who continued to be without coronary artery disease.

While this study has a comparatively brief follow-up period of 3 years, its large number of participants and its link to medical records lends it weight. That said, people's recall of their diets can be prone to error, and the dietary questions about fried foods don't allow us to differentiate between foods fried in one oil or another, not to mention which foods might have been fried or for how long.

What this does say is that it's still a good idea to save fried foods for a special treat - they should not be something you eat regularly.