When should you exercise?
Recent research shows that of those who maintained a significant weight loss for 7 years or more, the majority exercised at least 4 times per week and tended to exercise at about the same time every day.

Does Walkability Equal Walking?
Is your neighborhood walkable? As part of the overall effort to address high levels of overweight and obesity along with low levels of exercise, researchers are looking not only at barriers to eating healthy, but also at barriers to exercise. Walking is one of the easiest and cheapest exercises to perform, but some neighborhoods are more conducive to walking than others.

Good for you: less exercise than you might think 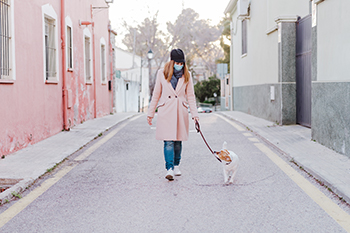 Just a few months ago I shared with you a meta-analysis of research into levels of physical activity and its impact on the risk of death from any cause (known as "all-cause mortality"). The authors found that after breaking down levels of activity into four, from least active to most active, those who were in the second-to-lowest level of activity were still 52% less likely to die of any cause than those who were least active (in the lowest level of activity).

You might think that this means that you need to take up a 10-mile-a-day running habit or something equally strenuous. Nothing could be further from the truth.

In an article published just this month in JAMA (2020;323(12):1151-1160), researchers from such institutions as the National Cancer Institute, the Centers for Disease Control and Prevention (CDC), and the National Institute on Aging analyzed data gathered through NHANES (National Health and Nutrition Examination Survey), a long-term, large-scale study of adults across the United States that began recruitment in 2003.

A portion of the participants in NHANES wore accelerometers for an average of almost 6 days (about 14.5 hours per day) in 2003-2004. These 4,840 participants averaged almost 58 years of age at that time (minimum age for participation: 40).

At the end of 2015 the authors accessed the National Death Index to find out which of those accelerometer-wearing participants had passed away and their cause of death, then correlated that information with not only average step count but also step intensity (that is, walking speed).

The authors looked specifically at the risk of death from cardiovascular disease as well as cancer, finding that the decrease in risk, although present, did not reach statistical significance.

When they analyzed step intensity (that is, Were those who walked faster at reduced risk?), the authors found no significant association between intensity and mortality - when they took into account the overall number of steps.

The authors caution that those who wore the accelerometers in this study tended to have a Body Mass Index over 30 (clinically obese) and were less likely to be those with a diagnosis of heart disease or heart failure or to have mobility problems. Further, those whose step count was higher were more likely to have a lower rate of diabetes, heart disease, or cancer, and tended to report themselves as being in good health.

While it's clear that those with a higher step count tended to be healthier, generally speaking, than those with a lower step count, this does suggest that a moderate amount of regular exercise is beneficial to almost everyone. 10,000 steps? Great, but not necessary. The risk differential between 8,000 and 12,000 steps isn't that significant.

The authors also noted that the accelerometers the participants wore do not differentiate between walking for exercise and performing household chores or gardening, nor do they include exercise such as swimming or cycling.

I encourage you to get a total of at least thirty minutes of activity every day while (right now) being mindful of social distancing measures. This doesn't have to be outside!