Improve glucose control with brown rice
A randomized, controlled trial conducted in India, which has the second greatest number of people living with Type 2 diabetes in the world, suggests that choosing brown rice instead of white rice may help those with metabolic syndrome improve their glucose control (Brit J Nutr 2019;121:1389-1397).

Slim Your Waist with Whole Grains and Legumes
I've said for years that the most important factor in weight loss is the number of calories you eat versus the number of calories you burn. That said, we also know that some foods are more filling and satisfying than others, which is just one explanation for why those who eat more whole grains tend to gain less weight over the years. Further, those who eat more legumes seem to have a lower Waist to Hip Ratio (WHR). 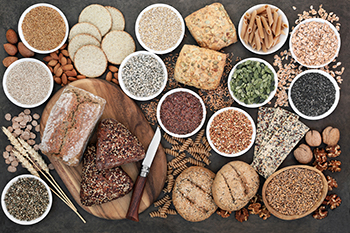 PMS (Pre-Menstrual Syndrome) is clinically defined as a set of symptoms that include mood and behavioral symptoms as well as physical symptoms. These include: headache, backache, or breast tenderness; anxiety, depression, fatigue, or irritability; and /or changes in appetite or insomnia during the period just before menstruation and disappearing shortly after menstrual onset.

It can be a serious condition, with some estimates seeing up to 10% of women seriously affected by the symptoms, and 20% of women meeting the clinical diagnostic criteria for the disorder.

Unfortunately the treatments for PMS focus largely on controlling how much the symptoms interfere with daily life (somewhat like telling people to take a pain reliever for a headache), which does not necessarily treat the underlying issue.

Previous studies of women with Premenstrual Syndrome have suggested that greater intake of certain vitamins and minerals, as well as whole grain products that are higher in those same vitamins and minerals, could help to relieve some symptoms of PMS. Today's article sought to draw a more direct line of effect between intake of whole grains and relief of PMS symptoms (Brit J Nutr 2019;121:992-1001).

For this study the authors surveyed the female nurses at their local hospitals (on a voluntary basis) for symptoms of PMS: those meeting the clinical criteria of PMS who were between the ages of 18 and 45 were invited to participate in the study. Given that many symptoms of PMS are similar to symptoms of depression, the authors excluded those meeting clinical diagnosis of depression, and also excluded those with diagnosed cancer or other conditions such as cancer, kidney or liver diseases, neurological or hormonal disorders, and other variables that might appear to be PMS symptoms.

The authors designed a parallel, randomized, controlled feeding trial that would last for 3 months. The 100 female nurses who met the exclusion criteria and chose to participate were assigned, 50/50, to an intervention or control group: the 50 nurses in the intervention group were asked to replace at least 4 servings of their daily refined grain consumption with 4 servings of whole grain - and to help them meet this goal, the authors provided the whole grain group with 840 grams of whole grain bread each week (120g per day) and asked them to avoid breads made from refined grains as much as they could.

The 50 nurses who were assigned to the control group continued with their usual diet for 3 months.

All of the participants filled out questionnaires documenting the severity of 20 different PMS symptoms on a daily basis for the duration of the study. Their weight, waist circumference, and other body composition measures were recorded at the start and end of the study, and at the start, midpoint, and end of the study the participants filled out detailed, 3-day (2 weekday, 1 weekend day) consumption records of everything they ate.

At the close of the study there remained 76 women participating. Half were in the intervention (whole grain consumption) group and half in the control group.

Interestingly, for for the four types of composite PMS scores - general symptoms, mood symptoms, physical symptoms, and behavioral symptoms - all of those in the intervention group reported higher scores (that is, worse symptoms) than those in the control group for the 2 menstrual cycles before beginning the whole grain intervention.

After the 3-month intervention period the authors took into account such variables as total and specific types of fiber intake, physical activity, total caloric intake, and other factors, and found that those in the whole grain group saw their PMS symptom scores decrease significantly each month, up to a total over the 3 months of about 50% - while those in the control group saw their symptoms remain about the same.

After analyzing the participants' diets for the duration of the study, the authors note that those in the whole grains group replaced 2 servings - fully half of the refined grains they would normally consume - with whole grains, while also adding an average of an additional 2 servings of whole grains to their diets. However, over the course of the study they actually lost total weight as well as body fat, thereby decreasing their total percentage of body fat.

I've discussed before the importance of consuming vitamins, minerals, and other supplements in the form of food, not pills. This research helps demonstrate why: the effects of the whole grains go beyond what would be expected from simple vitamin and mineral supplementation. Here are ways to incorporate more whole grains in your diet.