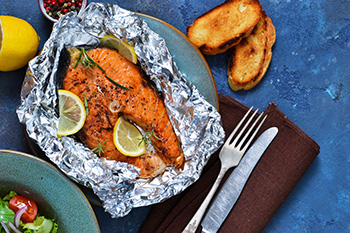 A little over a year ago I reported on a meta-analysis of randomized, controlled trials that concluded that for those at higher risk for heart disease, taking omega-3 fatty acid supplements had no effect on their risk of heart attack, stroke, or related events.

I concluded at the time that there was no reason to throw out the omega-3 supplements you might already have: they certainly don't seem to increase your risk of disease. That said, this research underlines the benefit of consuming our nutrients from food, rather than getting those nutrients in isolated, supplement form: better to eat the fish than take the pills.

Yet that meta-analysis was limited to those at higher risk of heart disease: participants in all 10 of the studies had a history of coronary heart disease, a previous stroke, or diabetes. What about those whose risk isn't elevated? Would omega-3 supplements benefit them?

Researchers at Harvard recently published the results of a 5-year randomized controlled trial that compared omega-3 fatty acid supplements of 1 gram of omega-3 fatty acids per day with placebo (NEJM 2018;doi:10.1056/NEJMoa1811403). Over 25,000 people participated in the trial: participants were at least 50 years of age (for men) or 55 (for women). About half of all participants were taking medication for high cholesterol, half taking medication for high blood pressure, and about 13% were diabetic.

After an average of 5.3 years (due to rolling start and end dates), the authors compared the rates of cardiovascular events and cancer diagnoses between the participants taking the placebo and those taking the omega-3 supplements.

Overall, those taking the omega-3 supplements did not experience heart attack, stroke, or death from another cardiovascular cause at higher rates than the group taking a placebo. Oddly enough, those taking the supplements were more likely to develop prostate or colorectal cancer (15% and 23% increase in risk, respectively). However, overall risk of death from "a major cardiovascular event" was still cut by 11%, risk of death from heart attack was cut by 18%, and risk from any cause whatsoever reduced by an amount considered clinically insignificant.

The authors also assessed the risk of cancers, overall, finding that the risk of "invasive cancer of any type" was increased by 13% among those taking the omega-3 supplements, while their risk of death from cancer decreased by 7%.