Coffee, Tea and Brain Tumors
Brain tumors make great television, but the truth is that they're pretty rare: the risk of developing a brain or nervous system tumor of any kind are between 4 and 8 per 100,000 person-years. Since they're so rare, there's very little opportunity for studying prevention.

Coffee and Cholesterol
In an effort to measure the effects of different roasts of coffee on cholesterol levels, researchers in Brazil recruited 20 healthy men and women, regular coffee drinkers between the ages of 37 and 61, to participate in a coffee-drinking study. 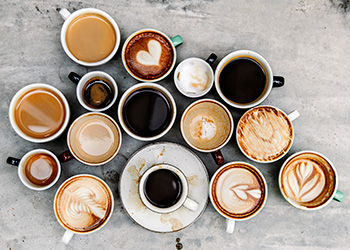 Coffee is a perennial subject here at Dr. Gourmet, with evidence for its positive effects on all-cause mortality, metabolic syndrome, and even colon cancer, among other conditions.

It's one thing to know that a substance has a particular effect on health, but quite another to know why it has that effect. The prevailing theory has been that coffee's abundant antioxidants help reduce chronic inflammation, and in this research from 2006 the authors found an assocation between the coffee intake of the women in the Nurses' Health Study and their markers of inflammation.

The Nurses' Health Study is an ongoing study, which means that now - 13 years later - a team of researchers is using data from both the Nurses' Health Study (all women) as well as the Health Professionals Follow-Up Study (all men) to perform a similar assessment (Am J Clin Nutr 2019;635-647). An additional thirteen years of data, along with advances in medical technology, makes it worthwhile to revisit that data. Had those associations changed? - and would adding the men in the Health Professionals Follow-Up Study make a difference?

The Nurses' Health Study started in 1976 and initially enrolled over 121,000 female registered nurses. In 1989 and 1990 over 32,000 of those women provided blood samples for various tests. The Health Professionals Follow-Up Study began in 1986 and included over 51,000 male health professionals, of whom over 18,000 provided blood samples between 1993 and 1995. Participants from both groups respond to detailed dietary questionnaires every four years.

Over the years other researchers have analyzed the blood samples of a portion of the participants of both studies - over 17,000 women and 8,000 men - for a number of results, including many markers of chronic inflammation. The authors of today's study utilized the data from both groups, but excluded those participants who had diabetes (of any type), cancer, or heart disease at the time the blood sample was taken, which means their analysis is based on over 15,500 women and over 7,300 men.

The researchers looked at 14 different biomarkers associated with inflammation and compared those with the amount of coffee the participants drank. The authors broke out coffee intake into total, caffeinated, and decaffeinated coffee, and into four levels of intake, from none to 4 or more standardized cups per day.

Somewhat unsurprisingly, whether coffee was caffeinated or decaffeinated had little effect on the markers of inflammation. After taking into account a number of different factors, from Body Mass Index to alcohol use, as well as other variables that might affect biomarkers of inflammation, the researchers found that higher levels of coffee consumption was linked to lower concentrations of certain inflammatory biomarkers that are associated with a greater risk of breast, colorectal, and prostate cancers.

On the other hand, higher coffee consumption was also associated with higher levels of total testosterone, which appears to help reduce the risk of breast cancers metastisizing and lower levels of estradial, which is associated with reduced risk of endometrial cancer.

This study helps illuminate just why coffee should be considered good for you and suggests more avenues for research. As I've said in the past, ditch the sodas for water, coffee (caffeinated or decaffeinated), or tea.