Mediterranean Diet, lifestyle factors, and the elderly
Researchers in the Department of Dietetics at Harokopio University, in Athens, Greece, evaluated the combined effects of a Mediterranean Diet, alcohol consumption, physical activity, and other factors on the cholesterol levels of persons 65 and over (Lipids in Hlth and Dis 2005;4:17).

The impact of obesity on the elderly
...[F]or those under 55, studies show that a lower Body Mass Index is directly related to the lowest mortality rates from all causes. But the inverse appears to be true for the elderly: some studies seem to link a BMI of 27 to 29 (near-obese) to a reduced risk of mortality. This is by no means certain, however, as studies can be flawed and we also know that Body Mass Index is not as accurate a measure of body fat in the elderly as it is in the adult population. 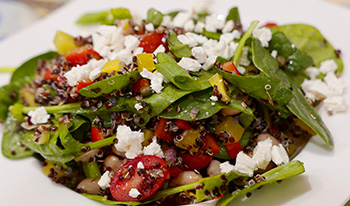 You may not realize this, but older adults (typically considered to be 65 or over) have specific dietary needs. As the body ages, it becomes more important to maintain bone health to prevent breaks, so Calcium and Vitamin D become even more essential. Some research suggests that greater protein intake may help reduce the sarcopenia (muscle wasting) that's so common in older age, but at the same time it's important to maintain a healthy weight - simply eating more protein-containing foods may contribute to weight gain.

Arterial stiffness is also known as "hardening of the arteries" or "atherosclerosis" - a condition in which the arteries become narrowed due to cholesterol deposits within the arteries. These deposits in turn contribute to the inside walls of the artery developing fibrous tissue and calcification (called arteriosclerosis). This can eventually block the artery, causing the death of the tissues supplied by the artery.

A team of researchers from across Europe designed a randomized controlled trial to assess the effects of a Mediterranean-style diet specifically tailored for those 65 and over on blood pressures and arterial stiffness (Hypertension 2019;73:578-586). Over 1,100 men and women between the ages of 65 and 79 were recruited from 5 clinics across Europe.

Half of the participants were assigned to a customized Mediterranean-style diet, while the other half continued their usual diet and were provided with information outlining the current dietary guidelines for their area. Both groups filled out 7-day food diaries before the official start of the study to evaluate each participant's baseline diet.

To help the test group adhere to their diet, the authors arranged to provide the participants with whole grain pastas, extra virgin olive oil, low-fat and low-sodium cheeses, margarine that was high in polyunsaturated fats (but without trans-fats), and the previously mentioned Vitamin D supplements.

Those test group participants filled out 3-day food diaries and returned any unused Vitamin D supplements at the 4th and 8th months of the trial so the authors could evaluate how well the participants stuck to their diets.

The authors compared the health experiences of those following the modified Mediterranean-style diet with those who continued with their usual diet. Further, with the detailed dietary questionnaires they were able to assess the impact of specific components of a Mediterranean Diet on the risk of all-cause mortality.

Over the test year those in the control group did not appreciably change their diet, while those in the test group improved their diet significantly, most notably in the areas of increased nuts, legumes, and whole grains, fish, low-fat dairy, and olive oil, while reducing their intake of products high in sugar by over 20%. Neither group appreciably changed their intake of lean meat and poultry or alcohol.

Still, those who were following the modified Mediterranean-style diet reduced their systolic blood pressure (that's the bottom or second number in a blood pressure reading) by almost 5 points, while those continuing on their usual diet lowered their systolic blood pressure by a little less than 1 point. About one-quarter of the participants had their arterial stiffness measured: those on the Mediterranean-style diet improved their arterial stiffness score (becoming less stiff) while those on the control (usual) diet saw their arteries become more stiff by about the same amount.

This randomized controlled trial shows that following a Mediterranean-style diet modified to meet the special dietary needs of those over 65 can indeed improve blood pressures and arterial stiffness. This is great - but the problem I see for my patients is that this study provided appropriate foodstuffs to the participants, making it easier (and cheaper) for them to follow the assigned diet. You, dear readers, can make dietary change a bit easier on yourselves by approaching these improvements one at a time: start slowly by using more olive oil in cooking rather than butter, then choose lower fat cheeses rather than full-fat cheeses, cut back on saturated fats by cutting out higher fat animal proteins and choosing leaner meats, and switch your white flour pastas for whole wheat pastas. Ease into these changes and you'll find your meals both tastier and better for you while still being delicious and satisfying.