Breast Cancer
Breast cancer is the most common invasive cancer in women: approximately 12% of all women will be diagnosed with breast cancer during their lifetime, and 2.7% of all women will die of it. The median age at diagnosis is 61 years, and nearly all - 98.5% - of women diagnosed with localized breast cancer survive for at least five years. Unfortunately, this five-year survival rate drops to just 25% for cancer with distant metastases at diagnosis. Numerous studies have looked at the way specific diets and foods have increased or decreased the risk of developing breast cancer.1

Colorectal Cancer
Colorectal cancer (CRC) is, quite simply, cancer of the colon and rectum and is one of the leading causes of cancer mortality. Forty percent of those who develop colorectal cancer will die of the disease.

Prostate Cancer
Prostate cancer forms in the tissues of the prostate gland located in the male reproductive system. It is the most common non-skin malignancy in men, and eventually 1 in 6 men will be diagnosed with prostate cancer at some point in their lifetime. Of those diagnosed, just 1 in 30 will die of the disease, however. Research indicates that most cases of prostate cancer progress so slowly that the patient doesn't ever realize he has it (these cases are identified when an autopsy is performed).

More organic foods may mean less cancer, but the evidence isn't in 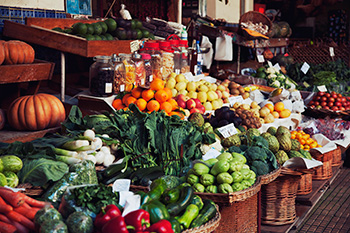 It seems like all the big media players have picked up on this study in JAMA (JAMA Intern Med doi:10.1001/jamainternmed.2018.4357), with everyone from the New York Times to CNN and Fox News reporting that consuming more organic foods reduces your risk of cancer.

The study in question uses data collected through a continuing observational study that started in 2009. At the start of the study the participants responded to a detailed baseline questionnaire that assessed demographics like education levels and income; height, weight, and gender; health status; level of physical activity; and overall diet.

Two months later these participants were surveyed and asked to estimate how often they consumed "16 labeled organic products," that include

After an average of about 4.5 years of followup, the authors compared the organic intake, overall diet quality, and other factors of those who developed cancer (other than skin cancer) with those who did not develop cancer. Of the nearly 69,000 participants included in the study, 78% were female with an average age of 44.2 years.

The authors state that "a higher organic food score, reflecting a higher frequency of organic food consumption, was associated with a decreased risk of developing NHL [non-Hodgkins Lymphoma] and postmenopausal breast cancer, while no association was detected for other types of cancer."

That's very exciting. Imagine if eating organic could mean that your risk of cancer could drop by as much as 25% (depending on cancer site)?!?!

Unfortunately, this research glosses over a number of factors that cast doubt on their results.

1. Self-reported food frequency questionnaires are notoriously inaccurate, with some estimates placing the level of error at up to 30% or more. People just like to cast themselves in a positive light: might they be reporting their organic intake as higher than it really is?

2. Further, what does "most of the time" (the question in the survey) really mean? 30% of the time? 50% of the time? It's not clear in the report on the research and thus we can't rely on the authors' report of the participants' self-reporting.

3. We know that products that are labeled "organic" are not necessarily pesticide-free. Despite the best efforts of the farmers, the soil they are growing or pasturing on may well still contain pesticides. How much pesticides and of what type may be present, due to previous use or even runoff from other farms? We can't know without testing the soil of every farm that wishes to style itself as "organic."

4. The participants tend to be of higher economic status: as the authors describe it, "volunteers with access to the internet are recruited from the general population and complete online self-administered questionnaires using a dedicated website."

5. Those of that reported higher economic status with higher organic consumption also had a higher diet quality overall, with greater consumption of fruits, nuts, and legumes; fish; less dairy and meat, and when consumed, lean meat; higher whole grains and vegetables, and... more organic products.

Don't get me wrong: this certainly suggests that further research into consuming more organic foods with regard to cancer incidence is worthwhile. That said, this particular piece of research should by no means be taken as proof that more organic equals lower cancer: there are too many unknown or unreliable variables. First, there's just one evaluation of "organic" intake at one point in time - in those who might be motivated to portray their intake of organic foods as higher than it is. Similarly, there's no assessment of the actual pesticide content of the foods that were actually consumed by the participants. Third, the authors themselves note that those who consumed more organic foods also had a higher intake of the nine points of a Mediterranean Diet.

While this research is interesting and definitely worth further exploration, in practice this will not change my recommendations to my patients: improve your diet with more vegetables, fruits, nuts, and legumes; consume more whole grains like brown rice instead of white rice; consume less red meat and make them leaner meats; avoid meats with nitrates; consume more fish; choose fermented dairy like yogurt or cheese rather than drinking milk; and use olive oil and other polyunsaturated and monounsaturated fats to cook rather than saturated fats whenever possible.

As I tell my medical students, "The enemy of better is perfect." It's far more important and effective for you (or your patients) to improve their diets overall in ways that are reasonable and cost-conscious, than to expect them to pursue a "perfect" diet, whether that is vegan, organic, or whatever.