Eating more highly processed foods linked to greater risk of cancer
My goal, whether through my own practice as a physician (yes, I see patients almost daily), through Dr. Gourmet, or through my work at the Goldring Center for Culinary Medicine, is to get people back in the kitchen and cooking for themselves and their families. At the most basic level, we know that cooking your own food is better for you because you have more control over what goes into the food you cook as well as the portion size you serve.

Busting the Myth: Eating Healthy is Cheaper and Doesn't Take Longer
Recently we offered another round of continuing medical education programs for physicians at the Goldring Center for Culinary Medicine. The cost of eating healthy came up, as it does at almost every event I do these days. There is a tremendous misperception about what making fresh food costs and the time that it takes vs. processed, boxed foods. Most people believe that it is more expensive to make fresh, healthier food and that it takes more time.

A breakfast to keep you satisfied
We know that it's important to eat breakfast: after all, by the time you eat breakfast you've likely been fasting for twelve hours or more, and if you're hungry (which you likely are), it's easy to choose foods that aren't going to help keep you satisfied, leading you to snack without thinking or to eat more than you need to at lunch. Previous Health & Nutrition Bites have looked at what will help you eat healthfully while keeping you satisfied until lunch, and higher protein and fiber seem to be the two most important considerations.

Lean, unprocessed red meat part of a heart-healthy diet - and may help with weight loss 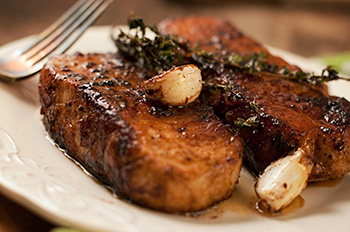 It's getting better, but I still have patients who believe that red meat is bad for them, and that if they want to eat healthier, they have to give up all red meat.

The truth, as you know if you've been following Dr. Gourmet for a while, is that processed meats like bologna, bacon, and sausage are far greater risks to your health than lean, unprocessed red meats like beef (from cows), lamb, and pork (not 'the other white meat'). Further, those risks appear to be associated more with the nitrites used to process the meats rather than any inherent quality of the meat itself other than their higher levels of saturated fats.

Mediterranean Diet guidelines state that to receive a point on your Mediterranean Diet score you should consume less than 4 ounces of meat (including both red and white meats) per day, on average (3.25 ounces if you are a woman). The question some researchers have is just how much red meat is allowed in order to reap the cardiovascular benefits of a Mediterranean Diet (Am J Clin Nutr 2018;108:33-40).

After taking into account age, gender, and Body Mass Index at each point, the authors note that those following a Med-Redn diet reduced their BMI more than those following a Mediterranean Diet, although that difference was not clinically significant after each participant had followed both diets.

The authors note that the standard advice has been to adopt a Mediterranean-style diet with a fairly low intake of red meat, like the control Mediterranean-style diet in this study. However, in this study the authors found that a higher intake of unprocessed red meat, closer to the typical amount of red meat consumed by Americans, conferred benefits that were similar to a diet lower in unprocessed red meat. This suggests that if you would rather not drastically cut your intake of red meat or avoid it altogether, choosing leaner red meats might be a positive step toward cardiovascular health in the context of an overall Mediterranean-Style Diet.

One caution attached to this study is that it was funded in part by the Beef Checkoff and the Pork Checkoff (both marketing groups for beef and pork, respectively), and at least one of the authors has received grant funding or travel reimbursements from the Beef Checkoff, the Pork Checkoff, the National Dairy Council, the North Dakota Beef Commission, and the American Egg Board - Egg Nutrition Center.

Even so, their results are consistent with other studies of lean, unprocessed red meat.