Portion size more important than turning off the TV
You've probably heard people say that if you're working on your weight, you should sit down at the table and eat your food without distractions like watching television. It's true that watching TV can lead both adults and children to eat more than they would otherwise. Music appears to have the same effect, suggesting that it's the distraction of additional sensory input that leads people to ignore their own internal cues to stop eating.

Lose Weight with Portion Control
Meal replacements have long been a popular way to lose weight. Metrecal was one of the first meal replacement drinks, introduced in the 1960's as a high protein powder that could be mixed with water and drunk in place of a regular meal. Slim-Fast in liquid form was introduced in the 70's, and was soon followed by sports drinks, protein bars, and all the pre-made meal plans you see today. 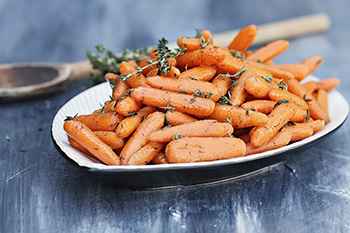 In previous Health & Nutrition Bites we've seen that when children are served more vegetables or fruits as a side dish with their meal, they tend to consume more of those sides - as long as they like them. This seems to be true, to some degree, in adults as well.

If larger portions of unhealthy foods leads to greater consumption, could we use that phenomenon to induce adults to consume more of healthier foods? You might assume so: fortunately for evidence-based medicine, a team of researchers in France and Australia performed two small studies to investigate whether presenting people with larger portions of healthy snacks might induce them to consume more of those healthy foods (Food Qual and Pref 2019;71:181-184).

The first study included 153 undergraduate students who were randomly assigned to perform a "taste test" of one of two types of snacks: either potato chips or apple chips. In addition to the random assignment of snack types, the participants randomly received either a small portion (about 3/4 of an ounce) or a large portion (about 1 1/2 ounces) of that snack. The students were asked to consume however much they desired of the provided snack and then answered survey questions regarding how much they enjoyed the snack (part of the cover story) as well as responding to demographic and other questions. In reality, the authors were interested in how much the participants consumed: any leftovers were weighed to determine how much they had consumed.

For the second study the authors provided snacks - baby carrots - to 77 high school students on their way in to watch a movie. Not only were the students provided one of two portion sizes of the baby carrots (1 1/2 ounces vs. 3 ounces), with the amount consumed measured after the movie, the type of movie differed as well: half the participants watched either "a general romantic comedy" or a comedy about a restaurant, with several scenes focused on food consumption.

In the second study those who were served the larger portion of baby carrots also consumed more than those receiving the smaller portion: once again, about 30% more. Interestingly, those who watched the food-related movie ate a larger percentage of the large portion than of the small portion.

This research supports the idea that larger portions sizes = larger consumption, whether the food is healthy or unhealthy. If you are watching your weight, maintaining weight loss, or working on getting your kids to eat more fruits and vegetables, you can use this research to your advantage by serving larger portions of healthy, low-calorie-density foods like vegetables and fruits: you (and your kids) will fill up faster, consume fewer calories, and be just as satisfied.