Thinking About Getting Pregnant? Think about your weight
One important step you can take to help ensure a healthy pregnancy is to consider your weight before even getting pregnant. Obesity has major effects on placental, embryonic, and fetal growth. Obese mothers are more likely to have large for gestational age (LGA) babies than lean moms, no matter how much weight they gain during pregnancy.

Gestational Diabetes
About halfway through your pregnancy, you are likely to have a "glucose tolerance test" to test for gestational diabetes. What is this condition and why do we test for it?

A Mediterranean Diet, Pre-Pregnancy, Helps Prevent Birth Defects
Can a woman's diet in the year before her pregnancy affect her risk of having a child with a birth defect? 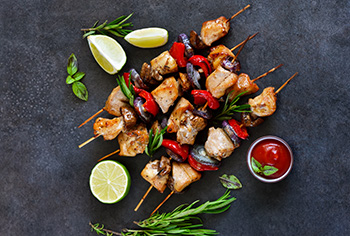 Researchers in Australia (Brit J Nutr 2018;120(4):435-444 ) utilized data from an ongoing study of women in Australia known as the Australian Longitudinal Study on Women's Health. The study began in 1996 and recruited women from three groups: those born between 1973 and 1978, those born between 1946 and 1951, and those born between 1921 and 1926. For the purposes of this research, the authors limited their analysis to those women born between 1973 and 1978 - a total of 9,081 women. After excluding those women who did not report giving birth to a child between 2006 and 2015, had a history of any type of diabetes before pregnancy, or who reported being diagnosed with gestational diabetes before 2003, the authors included over 3,600 women who gave birth to children in the appropriate time frame and had none of the pre-defined risk factors.

All of the women in the Australian Longitudinal Study on Women's Health had responded to detailed dietary, lifestyle, and demographic questionnaires, with the dietary questionnaires being repeated more than once over the course of the study.

The authors analyzed these dietary questionnaires and classified the women according to their dietary percentage intake of carbohydrates, breaking those carbohydrates down into levels of intake as well as looking at types of carbohydrates, from sugars to fiber.

Taking into account overall caloric intake as well as relative intake of carbohydrates to protein, fat, and carbohydrates (and other variables), the authors could compare the diets of those who developed gestational diabetes with those who did not.

I'm not an obstetrician, but as a board-certified internist I would advise my patients who were following a low-carbohydrate diet who were also looking to get pregnant to adopt a diet with more moderate levels of carbohydrates, while keeping the quality of those carbohydrates high. Here at DrGourmet.com we have guidance for those preparing for pregnancy as well as for those who are currently pregnant in our section "A Healthy Pregnancy with Faith Bontrager,RN, BSN."