Breakfast: Correlation is Not Causality
A common pitfall in interpreting research is mistaking a relationship between two facts (correlation) with one of the facts directly causing the other (causality). A good illustration of mistaking correlation with causality is as follows: "It's hot during the summer. There are more murders during the summer. Hot weather causes murders."

A breakfast to keep you satisfied 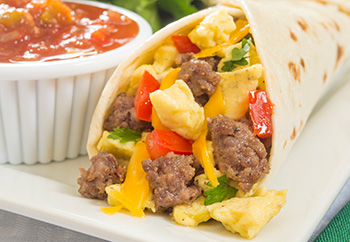 We know that it's important to eat breakfast: after all, by the time you eat breakfast you've likely been fasting for twelve hours or more, and if you're hungry (which you likely are), it's easy to choose foods that aren't going to help keep you satisfied, leading you to snack without thinking or to eat more than you need to at lunch. Previous Health & Nutrition Bites have looked at what will help you eat healthfully while keeping you satisfied until lunch, and higher protein and fiber seem to be the two most important considerations.

In a study reported on in the Journal of the American College of Nutrition (2018;37(4):293-301), a team of researchers in Illinois recruited 21 overweight or obese men and women clinically designated as "pre-diabetic" to participate in a breakfast feeding study comparing whether a high-carbohydrate breakfast or a high-protein breakfast would keep participants feeling fuller longer and whether that would affect what they ate at lunch.

On the last day of each intervention period (that is, at the end of the provided breakfast periods, whether the participants were consuming the high-carbohydrate breakfast or the high-protein breakfast), the participants had their assigned breakfast in the lab and responded to standardized hunger assessments every 30 minutes for up to four hours post-meal. Similarly, their blood was tested for cholesterol and glucose levels and their blood pressures were checked. Four hours after the in-lab breakfast, the participants were provided a standardized pasta meal for lunch and instructed to consume as much as they wished, with the researchers providing a known amount and measuring the amount of lunch consumed.

The results are not unexpected: those who consumed the high-protein breakfast were less hungry after breakfast than those consuming a high-carbohydrate breakfast with the same number of calories. That said, participants still consumed about the same amount of the standardized lunch meal regardless of what they had for breakfast.

This is a small and very short-term study, so the best we can say is that it supports what we already know about breakfast, which is that protein helps keep you satisfied. That said, it was funded by the pork board, which unavoidably taints the research.

It is worth mentioning, however, that breakfast meats like bacon or sausage are not necessarily bad for you. Certainly the amount of saturated fat in bacon or sausage should be something you would like to minimize, but in some ways the more serious concern is the amount of nitrites in your bacon or sausage: nitrites are known to contribute to cancers, especially colon cancer. It's best to keep your bacon and sausage intake to an occasional treat, and choose nitrite-free products.