Prevent Gestational Diabetes with a Mediterranean-style diet
It is common for pregnant women to ask about certain nutrients such as calcium or B vitamins. At one point research focused on individual nutrients and their role in a healthy mother and baby. However, the reality is that we don't eat "calcium" or "vitamin C," we eat food. As researchers have looked at overall eating and exercise patterns, we see good correlations between healthy eating patterns and better pregnancy outcomes and can offer practical suggestions to childbearing women.

Can a woman's diet in the year before her pregnancy affect her risk of having a child with a birth defect? Recently published research found a significant link.

Probiotics and a Decreased Risk of Gestational Diabetes
You know that yogurt helps to supply your daily calcium, but can it decrease your risk of gestational diabetes? Possibly. "Probiotics," those friendly bacteria in yogurt, miso, cottage cheese, aged cheese, kimchi, and other foods have been discussed in everything from research journals to commercials for "active" yogurt. 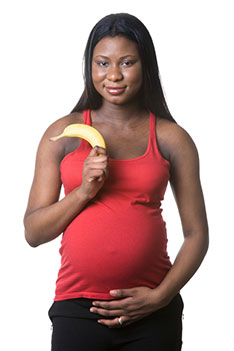 Women who develop gestational hypertension or pre-eclampsia nearly always see their blood pressures return to normal after delivery, but it seems from several small studies that such women still have a greater risk of developing high blood pressure, poor cholesterol scores, or even type 2 diabetes.

An article just published in the Annals of Internal Medicine (doi:10.7326/M17-2740) makes use of data gathered from the Nurses' Health Study II, which began in 1989 and enrolled over 115,000 women between the ages of 25 and 42. Every two years the participants respond to detailed questionnaires regarding their health and lifestyle - including pregnancies and conditions such as high blood pressure, cholesterol scores, and medications.

For their research, the authors of this study excluded women who had never reported a pregnancy as well as those whose first pregnancy was before the age of 18 or after the age of 45. Similarly, they also excluded women who reported having hypertension, diabetes, poor cholesterol scores, heart attack, or stroke before their first pregnancy. This left over 55,000 women in their sample.

The questionnaire the participants received in 1989 asked them to report on their pregnancy history, including diagnoses of gestational hypertension, gestational diabetes, or pre-eclampsia. For nearly two-thirds of these women, the authors were able to verify their self-reported diagnoses by reviewing their medical records. From 1989 onwards the participants also reported any diagnosis of (non-gestational) high blood pressure, whether they developed type 2 diabetes, and whether they were taking cholesterol-lowering medication.

After taking into account variables such as age at first birth, race/ethnicity, amount of physical activity, family history of high blood pressure or diabetes, Body Mass Index before pregnancy, overall diet quality, alcohol use, and smoking history, the authors found that those who developed gestational hypertension were almost 3 times as likely to become hypertensive later in life, 65% more likely to develop type 2 diabetes, and 36% more likely to have poor cholesterol scores.

You might be wondering what this has to do with food. Perhaps the most significant step a prospective mother can take to ensure a healthy pregnancy is to follow a healthy diet before they get pregnant - one that helps reduce their risk of high blood pressure and diabetes and improves their cholesterol scores.