Could what's good for you be good for the planet?
One of the reasons that fad diets fail is not that they are physically bad for you (although some might be): the problem is that people can't adhere to the diet for the long haul. That's usually what I mean when I talk about a "sustainable" diet: I am talking about a pattern of eating that one can reasonably stick with for the long term.

Lose more weight with a vegetarian diet? Don't believe the hype
At The Goldring Center for Culinary Medicine Conference earlier this month I did a presentation with a colleague, somewhat like a debate, on whether a plant-based diet was better for you than a diet that includes animal protein. My stance, as it has always been, is that we know that moderate amounts of lean meats are not harmful - and more importantly, for the vast majority of people it's not reasonable to expect them to adopt a vegetarian diet. Quite frankly, people like their meat and they're unlikely to give it up for the long term.

Eating more CAN mean weighing less!
Weight management is a simple mathematical formula: calories in must equal calories out. The simplest advice for weight loss, then, is to eat less. Easy for some people, but for most people simply eating less means feeling hungry and dissatisfied, especially when large portions of high-calorie foods are so widely available. To combat this, organizations such as the American Diabetes Association have recommended that instead of simply eating less of the same foods, they should eat the same amount of foods, but switch to those that are lower in calories.

(and may help you lose weight) 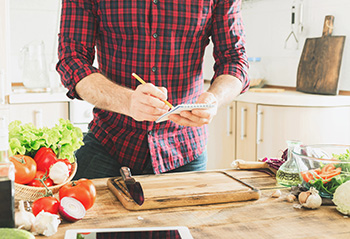 On the other hand, foods that are low in energy density have fewer calories by weight: think of popcorn, lettuce, or celery.

Choosing to eat lower-energy-density foods would seem to be a good weight loss strategy: foods that are lower in energy density have greater volume than foods that are higher in energy density with the same number of calories. For example: 100 calories of popcorn are about 4 cups in volume, while 27 M&M's are also about 100 calories. Which do you think would be more satisfying?

A team of researchers in the UK sought to test whether a low-energy-density diet would be satisfying over the long term, and whether that might help with a weight loss program (J Nutr 2018;148(5):798-806).

In the UK and Ireland, a popular weight-loss group is known as Slimming World. Somewhat similar to Weight Watchers in the United States, Slimming World combines weekly meetings and weigh-ins with other behavioral change components to help its members effectively lose weight. Among the strategies it promotes are daily food diaries and weight records as well as the idea of "Food Optimizing," advocating nearly uncontrolled intake of many low energy density foods and controlled intake of higher energy density foods.

The authors sought to compare the results of Slimming World's low-energy-density approach with the National Health Services' standard of care: a "free, structured, self-led program [that] recommends a daily reduction of 600 kcal" in the context of increased physical activity as well as reducing overall caloric intake.

For their research, the authors recruited a total of 96 women, about half from newly signed up members of Slimming World and half from female members of the NHS who were not members of Slimming World but who sought to lose weight using the NHS program. All of the women were clinically overweight or obese but otherwise healthy and had no conditions that might affect weight loss, nor were they taking medications that might affect weight loss.

The study began with a two-week run-in period to allow the participants to get used to their meal plans. They were weighed, their body fat was measured, and blood was taken for standard health panels in the first two weeks and at the end of the program. During weeks 3 and 4 and then again in weeks 13 and 14 each participant spent two days in the lab consuming a low energy density set of meals (breakfast, lunch, dinner) on one day and a high energy density set of meals on the second day a week later (the order of high versus low energy density days was set randomly).

The breakfast and lunch meals on the test days contained the same number of calories (adjusted for the caloric needs of each participant) regardless of whether it was a high-calorie-density day or a low-calorie-density day. The authors only describe the breakfast meal as "a cooked breakfast with a sweet side dish," but the lunch description might give you a better idea of what the participants ate: it's described as "a baked potato meal with salad."

After 14 weeks, those who were following the low-energy-density recommendations of Slimming World lost nearly twice as much weight (a total of almost 6% of their body weight) as those following the standard of care recommendations. Further, they reported being more satisfied with their weight loss program, felt it was easier to stick to, and felt more on control over theri eating than those on the standard of care program.