Why is eating fish good for you?
Eat more fish. Simple. This is not to say that those people who live in Mediterranean countries eat only fish. They do consume meats - beef, chicken, pork and lamb - but they consume less of it than Westerners and eat more seafood. Not a lot more seafood, however.

Are you eating the right kind of fish for your cholesterol scores?
I've written extensively about the omega-3 fatty acids in fish and their impact on heart health. Similarly, certain plant sterols (unsaturated fatty acids found in plants) can also have a positive impact on your risk of cardiovascular disease. Is there a combination of the right types of plant sterols and types of fish that will yield the most protective results? 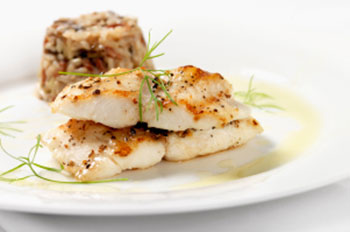 One of the marks of good science is that we don't assume.

I've said many times, both here at DrGourmet.com and in lectures that I have given to health professionals worldwide, that while in Algebra if A = B and B = C, then A = C, this is not true in medicine. Today's case in point is that we know from research into the Mediterranean Diet eating pattern that eating fish twice per week, especially fish higher in omega-3 fatty acids, will help improve your cholesterol scores, reduce your risk of heart disease, and even reduce your risk of all-cause mortality.

All this is well-established, scientifically speaking.

Yet while we might assume that if fish is good for you, then if you have diabetes fish must also be good for you, in accordance with the precepts of evidence-based medicine we can't just say, "Well, it's good for people in general so it must be good for people with a specific condition." Certainly we can't make that assumption about something like diabetes, that can have such a well-documented negative effect on one's risk of heart disease in general and one's risk of heart attack (myocardial infarction) or stroke in particular.

Accordingly, researchers in Sweden made use of information gathered through two long-term, large-scale prospective studies that followed a total of ~90,000 Swedish men and women for up to almost 12 years (Clin Nutr 2018;37:590-596). These men and women were enrolled in one of two studies, one for men, one for women, and all of whom were born between 1914 and 1948 and responded to health and dietary questionnaires initially between 1987 and 1990 and also responded to similar health and dietary questionnaires in 1997.

The authors looked only at those who, according to a national health registry, were diagnosed with type 2 diabetes, and also excluded from their analysis those who also had been diagnosed with cancer (other than skin cancer) or with some type of cardiovascular disease (angina, heart attack, or stroke).

The participants' dietary questionnaires included 8 levels of intake for many foods, including finfish, fried fish, and shellfish. These levels ranged from less than once a month to 3 or more times per day on average over the year prior to responding to the survey.

By accessing national health information, the authors could compare the diets of those diagnosed diabetics who experienced a heart attack (myocardial infarction), a stroke, or died from any cause, with those diabetics who did not.

Somewhat surprisingly, the authors found that fish intake of all kinds (regardless of whether the fish were finfish of various types, fried fish, or shellfish) appeared to have the greatest impact on the risk of heart attack, but not on stroke. Further, greater fish intake did not seem to equate with inversely lower risk: a mere 1-2 servings per week yielded the greatest reduction in risk of mortality from heart-disease-related causes.

This sort of research - confirming what seems to be intuitively obvious - is important work. It's critical that we physicians and evidence-based health practitioners apply the principles of evidence-based medicine to everything that we do in order to advise our patients in accordance with what we know is accurate according to our best-available evidence-based standards. While those beliefs and standards might change in the future, we know that they will change in response to scientifically rigorous evidence, not anecdote or poor-quality research.

And in accordance with that need for scientific rigor, it's important to note that this particular study was performed in a majority white population, thus its results should be interpreted with caution for non-whites. Second, the dietary questionnaire, while validated with a portion of the total participants, might not be accurate. Finally, correlation is not causality: those who ate more fish tended to exercise more, have a higher total DASH Diet score (that is, a better overall diet), and those who benefitted from fish intake tended to be older than 65 (the average age of the participant at the start of the study).

You don't have to eat fish all the time to reap the benefits of eating fish. Just 1-2 servings per week is all it takes.