Inflammation
Inflammation is the body's response to things that might cause damage: this might include dysfunctional cells, invading foreign agents (like a virus or a bacteria) or exposure to toxins. The purpose of inflammation is to attract immune cells to destroy the damaging invader and return the tissue to normal. Acute inflammation is a temporary response, with the probably familiar signs of heat, redness, swelling, pain, and perhaps loss of function.1

Pro-inflammatory diets lead to weight gain
Chronic inflammation, which we know contributes to your risk of heart disease and cancers, is more common in those who consume a more Westernized diet, which includes more trans and saturated fats, omega-6 fats (as opposed to omega-3s), sugar, and alcohol. A Mediterranean Diet, on the other hand, is a more anti-inflammatory diet, and we've seen that a Mediterranean Diet reduces your risk of those inflammation-related illnesses.

Testing resveratrol and curcumin as anti-inflammatories 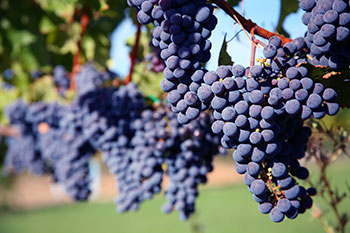 One of them is resveratrol, which is found in largest concentrations in red wine and grape juice, with smaller amounts in peanuts and berries. Similarly, curcumin, an element of the spice turmeric, has also been touted as an anti-inflammatory.

The problem with both resveratrol and curcumin is that while we have seen anti-inflammatory activity for these substances in vitro (that is, in the test tube), solid, high-quality evidence of their anti-inflammatory activity in humans is best described as sparse. (At this point I must remind the reader that "the plural of anecdote [personal story] is not scientific data.")

A team of researchers in Canada designed a study (J Nutr 2018;148:379-388) to assess the anti-inflammatory benefits of resveratrol and curcumin after noting that recent studies had suggested that the two substances together may produce a synergistic response: that is, resveratrol and curcumin given together appear to engender more of a response than each substance, administered alone, put together.

Twenty-two overweight men and women were recruited to participate in their placebo-controlled, crossover study. On two occasions each participant came into the lab and consumed a milkshake containing 75 grams of fat. Thirty minutes beforehand the participant was given a supplement in pill form: on one occasion the pill contained 200 milligrams of resveratrol and 100 milligrams of curcumin, while on the other occasion the pill was a placebo.

The participants' blood was tested before and after the meal to measure inflammatory response as well as measuring markers of bioavailability (essentially, bioavailability refers to how much of a given substance one consumes is actually utilized by the body).

After taking into account variables that might affect inflammatory response, such as age, sex, waist circumference, and baseline fasting values of insulin levels, etc., the authors found no difference in nearly all inflammatory markers between participants taking the active supplement or the placebo.

Only one inflammatory marker, having to do with the epithelial cells lining the veins, was reduced in those taking the active supplement. That said, the authors conclude that "there are no clinically significant acute effects of [resveratrol/curcumin] supplementation" on the post-meal inflammatory response in persons who would be expected to show greater inflammatory response (that is, those who are overweight).

The authors note that the study was specifically designed to maximize the possibility that the supplements would provoke a measurable response: overweight participants, standardized doses of two substances that have been shown to work together, and a high-fat meal, which has also been shown to provoke a strong inflammatory response. Yet the results are disappointing.

The results of this study don't mean that resveratrol and curcumin are not worthy of further research - they certainly are. That said, what it does mean is that for right now, given the unreliability of supplement manufacturers in the United States today, taking resveratrol or curcumin supplements is unlikely to do much of anything for you. Better for you to follow a Mediterranean-style, anti-inflammatory diet without wasting your money on supplements.