Protein Really Satisfies!
It does appear from several studies that it is the protein in your meal that helps you feel fuller and more satisfied, for longer than you would if you ate a meal with less protein. This is one of the reasons that my recommendations for a healthy breakfast consist of a starch, a fruit and some protein - that protein helps you avoid the lure of the doughnuts in the break room.

Should you consume additional protein to help maintain muscle mass? 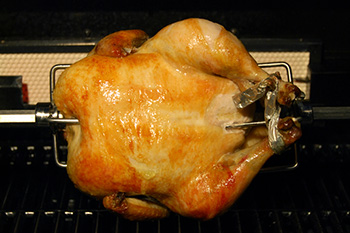 Sarcopenia is the natural loss of muscle tissue, quality, and strength that is commonly associated with the aging process. As people age, it's fairly natural for people to experience sarcopenia, with some estimating that those who are physically inactive may lose as much as 3%-5% of their muscle mass every ten years after age 30. Just why this happens is not fully understood, but scientists believe that among the causes are decreases in both activity and nutrition levels, hormonal changes associated with age, and changes in both the quality and number of motor neurons.

Research to treat sarcopenia has focused on nutrition and hormone levels, with some studies in athletes and older adults suggesting that increased protein intake - much greater than the Recommended Daily Allowance of 0.8 grams/kilogram of body mass - may be helpful in reducing the loss of lean body mass (LBM) associated with age. Similarly, injections of testosterone have been used in men to increase muscle mass and strength.

Researchers affiliated with multiple clinical research centers in the Boston, Massachusetts area collaborated on a study to assess the effect of protein intake on lean body mass in elderly men, reasoning that increased protein intake along with testosterone injections might show measurable benefit, especially in those men who had already experienced some physical effects of sarcopenia measured by a physical performance test (JAMA Int Med 2018;doi:10.1001/jamainternmed.2018.0008).

Seventy-eight men at least 65 years old participated in the 6-month study. The participants were selected based on their scores on a physical function test known as the Short Physical Performance Battery, which combines the results of three tests: gait (walking) speed, the ability to stand up from a chair and sit down again five times without stopping, and their ability to maintain their balance with their feet in certain positions. The scores of the participants in this study indicated that they had some limitations in lower body function, which might be improved with increased muscle mass.

The study itself was placebo-controlled with what is known as a 2 x 2 design, with participants randomly assigned to one of four different groups:

Before, at the midpoint of the study, and at the end of the six-month test period the participants' lean body mass was measured using sophisticated x-ray absorptiometry at various locations on their bodies and they were subjected to strength tests of their chest and legs as well other physical ability tests.

Some might be tempted to generalize these results to conclude that consuming amounts of protein in excess of the Recommended Daily Allowance (which in fact is 0.8 grams per kilogram of body weight per day regardless of gender or age) isn't helpful in terms of maintaining lean body mass, let alone increasing body mass. The truth is that these results simply can't be construed to apply to anyone other than those in whom the study was performed: elderly men with some existing physical limitations.

This study simply suggests that excess protein intake likely isn't helpful for elderly men - and that testosterone injections for those elderly men, if clinically indicated, may be helpful in the event of sarcopenia. For those curious about how much protein they should consume, an RDA of 0.8 grams per kg of body weight per day translates to about 54.4 grams of protein per day for a person weighing 150 pounds (68kg). That's about 6 ounces of chicken breast (which contains about 9 grams of protein per ounce). That's probably a whole lot less protein than you thought you needed.