Prevent stomach cancer by drinking green tea
Tea is great for you. Like coffee, tea (whether green or black) is a fantastic source of antioxidants, which help reduce your risk of many chronic diseases, from diabetes, to heart disease to cancer. In women, higher intake of black tea has been linked with reduced risk of ovarian cancer, specifically, while a study in China showed that drinking 5 or more cups of green tea per day reduced the risk of all-cause mortality by as much as 31%.

Mediterranean Diet and Esophageal Cancer
Less than 10% of those in Iran who are diagnosed with esophageal squamous cell carcinoma survive for 5 years or more past diagnosis. (By way of comparison, 84% of women diagnosed with breast cancer in the UK survive 5 years or more.) Esophageal cancer is the sixth most common cancer in the world and fourth most common in developing countries. It is even more common in what is known as the "esophageal cancer belt," which includes Iran, China, and northern France.

A history of moderation may improve your chances of surviving colorectal cancer
...That said, the risk of developing gastro-esophageal (esophagus and stomach) cancers is slightly (just 1%) higher among those who drink. A new study in the American Journal of Clinical Nutrition looks at alcohol use and survival in those diagnosed with colorectal cancers (2016;103:1497-506). 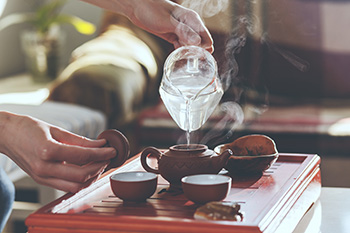 Two weeks ago I reported on a review article out of China that reinforced the existing evidence that drinking green tea may help prevent stomach cancer - as long as that tea isn't "very hot," which was linked to higher rates of stomach cancer.

Today's research article looks more closely at the question of temperature as it relates to esophageal cancer in a prospective study that enrolled over 450,000 men and women in China and lasted almost ten years, on average (Ann Int Med doi:10.7326/M17-2000).

Upon enrollment the participants responded to a questionnaire that asked extremely detailed questions about tea consumption, from how often they drank tea (9 increasing levels) to the temperature (room temperature, warm, hot, burning hot), the type of tea (green, oolong, or black tea), to the volume of tea leaves they used (in grams) and how often they changed the tea leaves. In addition to the usual demographic information such as education and marital status, the authors also surveyed participants about other cancer-fighting or cancer-causing variables such as alcohol intake, smoking, physical activity, and their intake of fruits and vegetables.

After taking into account those cancer-related variables, the authors found no statistically significant association between women's preferred tea temperature and their risk of esophageal cancer. Men, however, were a very different story.

In light of that information, the authors returned to the question of temperature, finding that as long as the participant did not smoke, nor did they drink alcohol on a daily basis, the temperature of their tea, how much they drank, how many tea leaves they used, or other variables around tea drinking had no statistically significant effect on risk of esophageal cancer.

The really important takeaway here is the importance of not smoking and drinking alcohol only in moderation, if at all. Yes, the International Agency for Research on Cancer has classified drinking beverages over 149°F (65°C) as "probably carcinogenic to humans," and this study would appear to lend credence to the theory that repeated burns ("thermal injury") to the esophagus may enhance the effects of cancer-causing agents that come in contact with those burns. You might say this is a case of "don't add insult to injury:" don't add alcohol or smoking (insult) to burning your throat with any overly hot beverage, whether it's tea or something else (injury).