It's the fast food, not the portion size
Eating studies have suggested a number of factors that might be affecting the amount people eat when they eat fast food. First and most obviously, the portion sizes have increased. Second, people tend to eat fast food meals more quickly, which can override the body's natural signals of fullness. Further, fast food is what we call "energy dense": it's high in calories for its physical size.

Portion size more important than turning off the TV 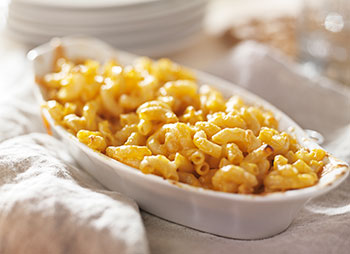 You've probably heard people say that if you're working on your weight, you should sit down at the table and eat your food without distractions like watching television. It's true that watching TV can lead both adults and children to eat more than they would otherwise. Music appears to have the same effect, suggesting that it's the distraction of additional sensory input that leads people to ignore their own internal cues to stop eating.

Portion size is also an important part of managing intake. The amount served at restaurants has grown over the last few decades, as have the serving sizes in cookbooks. This distortion means that people regularly underestimate the number of calories in what they eat, which can have a huge impact on your waistline.

Given that sometimes you can't avoid background noise or the portion size you start with (say, at a restaurant), if you put the two together - larger portion size and distracted eating - is the effect cumulative? Or might one make a bigger difference than the other?

Twenty adult men and women of clinically normal weight participated in the feeding study, carried out at the University of Tennessee at Knoxville (Appetite 2017;117:191-196). On four separate occasions each participant visited the lab for a lunch of macaroni and cheese and a green salad. On two occasions the participants watched a 30-minute researcher-selected television show while they ate, and on the other two occasions they were simply given 30 minutes alone to eat. The participants were served what was termed a small amount for lunch (containing about 1,000 calories) or a large amount of double the small portion.

The participants kept records of what they had eaten the day before their visit and were instructed to eat their usual breakfast (no breakfast skippers were enrolled in the study) at least three hours before their lunch appointment. How much each participant ate was measured by weighing what the participant left on their plate.

Clearly portion size is much more important than avoiding distracted eating if you are looking to maintain or lose weight. Know what a real serving size is, put that on your plate, and then if you must be distracted (i.e., watching television or at a party), don't go for seconds. Here's a guide to portion sizes.