Coffee is brain food
Researchers in China scoured peer-reviewed journals to find 9 published, prospective studies that not only assessed mental status and cognition using standardized tests, but also asked participants to report on their usual intake of coffee.

Is drinking coffee bad for you?
There has never been good evidence for telling patients not to drink coffee. In fact, there's a ton of research showing that coffee is good for you. 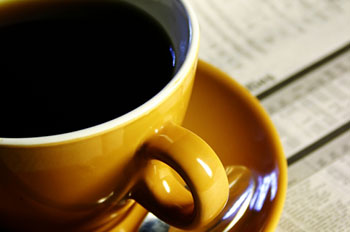 Coffee is one of, if not the most widely consumed beverages in the world, so it's no surprise that there's been lots of research into its effects on human health. It's brain food, may help prevent gout attacks and improve your blood sugar control (important for diabetics), reduces your risk of colon cancer, and reduces markers of inflammation, which are linked to your risk of cancer and heart disease.

The drawback of a lot of research, however, and not just research into nutrition, is that the majority of research subjects are white, which limits our ability to generalize results to other ethnic groups. In 1993 a team of researchers at the University of Hawai'i and the University of Southern California, with funding from the National Cancer Institute, began recruiting men and women who lived in either California or Hawaii and were between 45 and 75 years of age to participate in a prospective study (Annals Int Med doi:10.7326/M16-2472). Of the participants in this study, 28% were Japanese-American, 25% were white, 22% were Latino, 17% were African-American, and 7% were Native Hawaiian.

Upon enrollment each participant responded to a questionnaire that asked about lifestyle, smoking status, personal and family medical history, and height and weight. A detailed dietary questionnaire included questions about coffee intake, including number of cups drunk per day and whether that coffee was caffeinated or decaffeinated.

On a yearly basis until the end of the study in 2012, the authors accessed the files of state death certificates filed in both California and Hawaii, looking for any study participants who had died. The authors could then assign most of the deaths (74%) to one of the top ten causes of death in the United States: heart disease, cancer, chronic lower respiratory disease, stroke, accident, Alzheimer's Disease, diabetes, influenza or pneumonia, and suicide.

After categorizing coffee intake into 6 increasing levels of intake, from never to more than 4 cups per day, the authors compared the coffee intake of survivors with those who died during the study. In their analysis they took into account not only such variables as age, sex, ethnicity, Body Mass Index, education, and physical activity, but they also broke out smoking status into current versus former smokers - and in the case of former smokers, they further looked at how many years it had been since they quit.

It's interesting to note that about 16% of the participants didn't drink coffee at all, while those who drank more coffee were more likely to be white, male, at the younger end of the group, and tended to drink more alcohol. Heavy coffee drinking (4 or more cups per day) seemed to go hand in hand with smoking: 74% of those heavy coffee drinkers were current or former smokers.

That said, after taking the variables above into account, those who drank 1 cup of coffee per day were 18% less likely to die of any cause than those who did not drink coffee. Separating out the different ethnic groups made little statistical difference in the results. When they looked at specific causes of death, coffee drinking seemed to be related to a lower risk of death from heart disease, lower respiratory disease, stroke, diabetes, and kidney disease, but not flu/pneumonia, Alzheimer's, accidents, or suicide. Indeed, 1 cup per day reduced the risk of death from heart disease by 16%, diabetes by 15%, and kidney disease by 40%.

The results did not differ between those who drank decaffeinated coffee and those who drank caffeinated coffee, leading the authors to conclude that it's unlikely that the caffeine is the factor responsible for coffee's effects. Your takeaway should be that unless there is some reason for you to avoid coffee (or if you just don't like it), this study adds to the body of evidence we have that drinking a cup or two a day is good for you, regardless of your race or ethnicity. (Don't like coffee? Have tea instead!)