Low-carb diets do not burn fat
Proponents of low-carb diets will tell you that a high-fat, high-protein, low-carbohydrate diet will induce your body to burn fat. The theory is that a higher intake of carbohydrates in the diet causes greater insulin secretion, and that results in the body directing its circulating fat into storage. With less fat circulating for the body to use for fuel, the body decreases its basal metabolic rate and increases food intake. This results in weight gain. Decreasing the proportion of carbohydrate as compared to fat in the diet without cutting protein or calories, they argue, will then theoretically reduce insulin secretion, raise your basal metabolic rate, and induce the body to use stored fat for fuel.

Does the DASH diet have to be low-fat?
One of the challenges in studying diet is that we're studying, well, people. Asking people just to recall what they eat is prone to error (although there are ways to ensure more accurate data), and as anyone who has tried to lose weight on a strict diet will tell you, it's tough to stick to a restrictive diet for the long haul.

Low fat diets may actually be bad for you 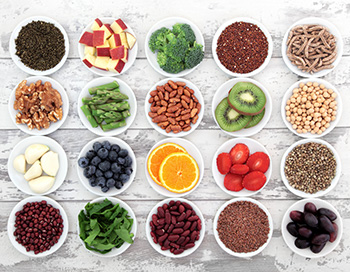 While the supposed health benefits of a low-fat diet have largely been disproven, there are still those who maintain that a low-fat diet helps those with heart disease avoid worsening of their condition, which can mean heart attack, stroke, or death.

Those proponents of a low-fat diet unfortunately rely on cherry-picked studies (that is to say, ignoring research that contradicts their beliefs) or fundamentally flawed research - or both. (Not to mention our old friend, the personal anecdote).

Fortunately the NIH's National Heart, Lung, and Blood Institute funded the Women's Health Initiative Dietary Modification Trial, a large-scale, long term study including over 48,000 postmenopausal women who were between the ages of 50 and 79 at the start of the study in 1997 (Am J Clin Nutr 2017;106:35-43). 40% of the participants were assigned to a low-fat diet with a target of 20% of total daily calories from fat, while the other 60% acted as the control, following their usual diet.

In the first year of the study, those in the low-fat diet group participated in 18 sessions of a group dietary behavioral program to help them meet the program's goals of consuming 20% of their calories from fat, increasing vegetable and fruit intake to at least 5 servings per day, and increasing grain intake to 6 servings per day. After the first year the meetings continued once every three months through the end of the initial portion of the study in 2005. The control group received "printed health-related materials only."

The authors monitored the participants' diets by administering regular food frequency questionnaires to a representative sample of both the low-fat dieters and the control group. All of the participants responded to medical history questionnaires twice a year, which allowed the authors to monitor not only health outcomes such as heart attack or stroke but also any medications the women might take as well as when a medication was started or stopped. When necessary the researchers were able to access the participants' medical records for verification.

For those women who did have identified heart disease at the start of the study, the low-fat diet did not affect their risk of stroke, but their risk of heart attack or needing angioplasty of bypass surgery increased by 47%. As the authors put it, "we were not able to rule out the possibility that dietary changes in [the low-fat diet group] could have contributed to their [increased risk of heart attack, angioplasty, or bypass surgery]."

Those with high blood pressure, but without heart disease at the start of the study who went on the low-fat diet saw no clinically significant change in their risk of developing heart disease, having a heart attack, needing angioplasty or bypass, or indeed, death from all causes. The authors note, however, that changes in whether those participants were taking cholesterol-lowering medications or not over the course of the study could have hidden some small benefit that could be attributed to the low-fat diet.

The authors mention in their closing that they will be further analyzing the data to determine if there were certain dietary patterns that contributed to the results, and I look forward to seeing those data published. In the mean time, view with great caution the claims that a low-fat diet will make you heart attack proof: you might die of a stroke instead.