Snack better, eat less later
Dr. Gourmet is not about weight loss. Our (my) goal is to get people eating better: getting back into the kitchen, making better choices at restaurants, and snacking sensibly. Research shows that improving the quality of what you eat can have a big impact on your long term health even if you're overweight and don't lose a pound.

More reason to switch your snacks to nuts 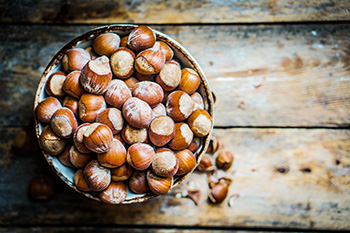 A team of researchers in New Zealand have shown that although the number of calories you eat in snacks are mostly offset by a reduction in the amount you at regular meals, choosing nuts instead of chocolate or potato chips means your diet improves overall (Eur J Nutr 2017;56:1255-1267).

There's been some controversy around the question of snacking, with some folks advocating eating more frequently and others (including myself) advising caution due to the possibility of consuming more calories than you need. We know that children, if allowed to choose the amount they eat, will usually choose to eat about the right amount for them - it's adults whose hunger cues can be overridden by emotion, availability, and the expectations of others, to name just a few influences.

Today's research suggests that adults may do the same.

Just over 100 men and women with normal Body Mass Indices participated in the authors' snacking study. Each participant was randomly assigned to one of four groups: three of the groups were distributed individual, pre-packaged daily snacks for the 12-week duration of the study, while the fourth received no snacks and served as the control. The three snack groups received about the same number of daily calories (about 260 calories per day) in their provided snacks, with one group receiving milk chocolate, a second receiving potato chips, and the third being provided with hazelnuts.

The participants were told that they could choose to consume those provided foods between meals, as snacks, or they could incorporate their supplied food into their regular meals, if they wished. No other dietary advice was given: participants were to follow their usual diet other than consuming the assigned snack foods.

The authors collected two sets of three detailed food diaries from the participants, once at the start of the study (before adding the snack foods) and again about midway through the study. Since the snacks were pre-bagged, the authors collected the serving bags from the participants at the end of the study to measure how well they had complied with instructions.

You might expect that the participants receiving the snack foods would have gained about the same amount of weight: they had all been consuming the same number of extra calories, after all. Yet none of the snacking groups gained weight. A closer look at their diet records revealed that the participants were compensating for the additional calories in the snack foods by consuming fewer calories at other meals.

When the authors analyzed not just the number of calories consumed, but also the nutrients in those calories, they found that those consuming the potato chips ended up consuming slightly more fiber than during their usual diet, while the chocolate group consumed significantly more sugar than during their usual diet. This took into account the fact that the participants were also partially compensating for the increased fiber or sugar by decreasing the fiber or sugar elsewhere in their diet.

The hazelnut group, however, saw much higher intake of polyunsaturated and monounsaturated fats - both of which have been linked to better heart health. Consuming the unsaturated fats in the hazelnuts was not compensated for quite as well as the fiber or sugar in the other snacks.

This should not be taken as permission to snack as much as you want on whatever you want: 260 calories per day in snacks is only about 15% of 1,800 daily calories. Compensating for those extra calories by consuming less at regular meals might not be very noticeable in terms of meal size. What this should do is draw your attention to how easily you can improve the quality of the calories in your diet - by choosing nuts as snacks - without significantly changing your regular diet.