Will eating more vegetables reduce the risk associated with red meat?
The research is quite clear that red meat is not something you should be eating every day. Too much red meat has been implicated in a greater risk of developing colon cancer, breast cancer, heart disease and diabetes, and an overall greater risk of death from any cause. On the other hand, we know that a higher intake of fruits and vegetables is great for you, reducing the risk of breast cancer, reducing the levels of inflammation in the body, and reducing your risk of heart disease, among many other benefits.

Don't panic!; or, Yes, you can still eat red meat
If you follow health news at all, whether that's online or just catching the evening news on television, you've probably heard about this study, just published in the Archives of Internal Medicine (doi:10.1001/archinternmed.2011.2287). While the media has been making much of the story, acting almost as if eating red meat of any kind will make you drop dead, the truth is that if you've been following Dr. Gourmet and eating a Mediterranean style diet, you know that there's nothing to be so alarmed about.

Red meat still not bad for you
Older studies have linked eating more red meat with a higher risk of heart disease and type 2 diabetes. But is it the red meat itself, the higher saturated fat that's associated with red meat, or something else? Other studies have suggested that the culprit might be increased inflammation due to a higher level of blood iron. On the other hand, for those who have normal iron levels, changing the amount of red meat intake has been shown to have little effect on blood iron levels.

Eating red meat does not lead to heart disease 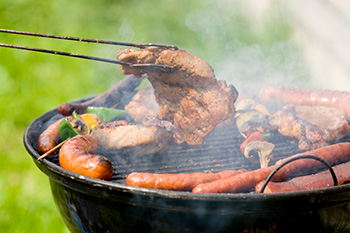 Those of you who have been following Dr. Gourmet or The Goldring Center for Culinary Medicine for more than a little while are well aware that I am a proponent of a Mediterranean-style Diet, which includes as one of its nine principles the idea of less red meat and leaner meats: an average of about 4 ounces of meat per day (including both land and sea animals), and not consuming more than about 1 serving of red meat (which includes beef, pork, lamb, goat, and game animals such as venison) per week.

For some people this seems too permissive, arguing that the research shows that a strict vegan diet of no animal protein whatsoever confers even more health benefits than a Mediterranean-style diet. They feel that physicians should advocate that their patients adopt a vegan diet because it is the "best" diet.

I won't be arguing that particular case today, although if you attend the first Culinary Medicine Conference, Health meets Food™, in June you can hear me speak on the topic. Instead, today's article looks at the association between unprocessed red meat intake and the markers of cardiovascular disease in the context of randomized controlled trials, which as you may recall are considered the gold standard of clinical research.

The authors of this study, all at Purdue University, scoured the literature and identified 24 randomized controlled trials that compared groups that consumed an average of at least one-half serving of unprocessed red meat per week (with one serving defined as 2.5 ounces of cooked meat) with a control group of those that consumed less than one-half serving of unprocessed red meat per week. The studies qualified for inclusion in their review if they also included only adults 19 years of age or over and reported on at least one of the following risk factors for cardiovascular disease: total cholesterol, LDL cholesterol, HDL cholesterol, the ratio of total to HDL cholesterol, triglycerides, and blood pressures (Am J Clin Nutr 2017;105:57-69). The 24 trials included nearly 1,100 adult men and women and lasted anywhere from 2 to 32 weeks.

The authors' working hypothesis was that consuming at least 0.5 servings per day, on average, of unprocessed red meat would increase people's risk of heart disease by negatively affecting at least one of the relevant risk factors, but to their surprise they found that "the results showed no differences in postintervention values" between the groups who consumed at least 1/2 serving of red meat per day or less than 1/2 serving per day of unprocessed red meat per day. Further, "there was no indication that consumption of progressively higher red meat amounts influenced these... risk factors."

They checked their work quite carefully by performing various analyses that might have shown one or more of the individual studies, or certain smaller or larger levels of red meat intake, having too much influence over the whole, but found nothing.

In conclusion, the researchers note that both the DASH diet (Dietary Approaches to Stop Hypertension) and the Mediterranean Diet both include modest amounts of unprocessed red meats and both are considered "heart healthy" diets, although the research into the Mediterranean Diet's effectiveness has largely been limited to observational studies (with one significant randomized controlled trial). Further, much of the research into red meat either groups all red meats, both processed and unprocessed together, or doesn't adequately specify what type of meat or red meat is being researched or recommended.

If you would like to adopt a vegan diet, by all means: do so. For the vast majority of my patients, a vegan diet is simply unsustainable for the long term and they eventually give up and revert to their previous, poor diet (my wife describes this as "perfect is the enemy of better").

If you don't want to give up red meat, it seems clear that having a leaner steak once a week or so, if you're following an otherwise healthy diet, will have little effect by itself on your risk factors for heart disease. Bear in mind that this study focuses on unprocessed red meat and not processed meats like sausage, cold cuts, bacon, or meats that have been smoked, cured, salted, or otherwise chemically preserved.