You CAN get used to less salt!
Not long ago a reader wrote to me and asked what reducing our salt intake was going to prevent. He seemed to think that the need to reduce our sodium intake had not been adequately established and that the issue was not salt itself but rather what the salt was put on (or in).

When you don't know it's low sodium
Way back in 2011 I shared with you an article about reducing the amount of salt in bread. Breadstuffs are one of the largest sources of sodium in our diet, so a team in the Netherlands conducted what is essentially a blinded taste comparison of salt-reduced breads with standard breads. They found that those who ate breads with progressively lower amounts of sodium over several weeks did not really notice that their bread was less salty, suggesting that people could fairly easily become accustomed to less sodium in their food.

A Novel Salt Substitute: Smell
Researchers with Unilever, one of the world's largest food companies, have been looking at different ways they might reduce the sodium content in foods without compromising flavor. The flavor effects of reducing sodium in a food, they noted, isn't limited to reducing the food's perceived saltiness: it also affects other components of flavor as well as reducing the food's overall flavor intensity. Would other ways of boosting flavor help compensate for lower sodium?

Making the cut - at restaurants 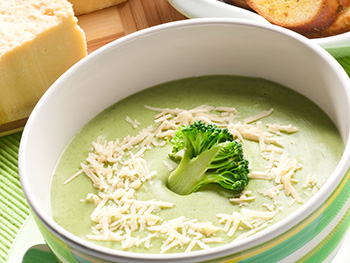 People believe that healthy food just can't taste very good. It's well-known in the restaurant world that if you label a dish "healthy" you'll sell less of it for exactly that reason: it's as if they had labeled the dish "doesn't taste as good as other things on the menu." Yet most restaurant chefs will also agree that they could cut the amount of fat and calories in their dishes by 10% or more and most of their patrons wouldn't notice. I've been saying for years that chefs should judiciously cut the fat, salt, and calories and not tell the patrons.

With some sources estimating that the typical American eats half of all of their meals away from home, cutting calories in restaurant food could make a huge difference in the number of overweight and obese Americans. We at The Goldring Center for Culinary Medicine have done some research into cutting sodium alone in popular New Orleans restaurant dishes, but today's research goes a step further and gets the restaurants themselves involved.

The authors in this study worked with six nationwide restaurant chains to conduct taste testing of a total of 24 specific items on their menus in comparison with versions of the same dish with fewer calories, less sodium, or both (Obesity 2016;24(12):2497-2508). Although the chains are not identified in the study, the authors worked with restaurants from the fast food, fast-casual, buffet, and full service sectors. Over 1,800 taste testers were recruited with assistance from each restaurant's marketing team and their customer email list. The qualified tasters were between the ages of 18 and 70 and all had previously ordered at least two of the menu items they were to test.

Working with the chefs of each restaurant, dietitians working with the research team helped create reduced-calorie and -sodium versions of 4 different menu items, taking care to ensure that these new versions were feasible for the restaurant's existing supply chain and kitchen equipment. Two new versions of each recipe were created: one termed "slightly modified" (the smallest amount of change in the nutrition information) and one "moderately modified" (with somewhat greater change in the nutrition information). This resulted in a total of 12 dishes to be tasted per restaurant.

The actual taste testing took place in each respective restaurant and each participant sampled a total of four menu items that were randomly selected from the three versions of the restaurant's four targeted recipes. Testers did not know the object of the study, nor were they told whether the recipes of the food they ate were altered in any way: they were simply told the name of the item and asked to take a minimum of 3 bites. Each dish was presented separately after which the tester responded to a questionnaire that measured their overall liking of the dish, whether they would choose to purchase that dish in the restaurant, and other questions. Participants received gift cards in payment for their participation in the research.

I wasn't surprised by the results: the reduced-calorie or -sodium versions of 19 of the menu items were rated as highly or higher than the original versions of the items. Moreover, the moderately modified versions of 8 of those recipes were considered acceptable. Interestingly, the testers rated many of the recipes that had been targeted specifically for cutting salt as "too salty," suggesting that chefs could cut salt even further (these recipes included hummus, potato salad, chicken soup, and broccoli cheddar soup).

Generally speaking the calorie and sodium reductions in the modified dishes were achieved by simply reducing the amount of one or more ingredients in the dish. This might range from less cheese on a sandwich to less mayonnaise in a chicken salad. Not only does this support my contention that chefs could easily reduce the fat and calories in their dishes (as long as they don't tell their guests), this means that chefs could cut their food costs as well (read: make more money), making this a win-win for everybody.