Slim Your Waist with Whole Grains and Legumes
I've said for years that the most important factor in weight loss is the number of calories you eat versus the number of calories you burn. That said, we also know that some foods are more filling and satisfying than others, which is just one explanation for why those who eat more whole grains tend to gain less weight over the years.

Legumes Really Satisfy
Researchers in Toronto, Canada (Brit J Nutr doi:10.1017/S0007114511005836) noted that although legumes themselves are low-glycemic-index foods, they are often eaten with high carbohydrate foods such as rice, pasta or bread. Would eating a legume-rich meal have an effect on how much a person ate at that meal - and how would their blood glucose be affected afterwards?

What are legumes, and why are they good for you?
The word legume refers not only to the species of plants, but also to any fruit that grows seeds lined up in a pod. (I find it interesting that peas and black beans are actually considered to be fruit.) Also known as pulses, legumes include beans, soybeans, lentils, peas, peanuts, snap beans, and any edible pod such as green beans, pole beans, and okra. 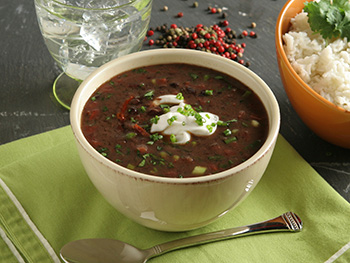 We report on nutrition research so that people know how to be healthier - and the overall point of that is to live longer, healthier lives. So a lot of nutrition research at least starts with younger people: look at how many of our Health and Nutrition Bites talk about research that includes adult men and women between the ages of 18 and 70. Certainly there are studies that focus exclusively on those who are, say, over 65, and we've reported on a few, from alcohol-free beer and elderly nuns (yes, really), whether it's better to be of normal weight or to be overweight as you get older, and if you should continue drinking coffee.

Today's research looks specifically at those 70 or over (Asia Pacific J Clin Nutr 2004;13(2):217-220) and makes use of data collected in a study known as "Food Habits in Later Life," which seeks to identify the positive dietary habits of "long-lived elderly people." This study includes 785 men and women from five different areas all over the world, including Japan, Sweden, Greece, and Australia.

Over the 7 years of the study only 169 people died, and the authors compared their dietary intake with those who did not.

After taking into account the individual participant's age at enrollment, their gender, whether they smoked, and their location and ethnicity, the authors found that the two elements of a Mediterranean-style diet that were most likely to predict the participant's survival was the amount of fish or shellfish they ate and the amount of legumes they consumed. For every 20-gram increase in average intake of fish or shellfish, the participants were 4% less likely to die of any cause, while each 20-gram increase in legumes conferred an 8% reduction in risk of death.

Increasing your intake of fish or legumes by an average of 20 grams per day is actually pretty easy: 20 grams is about 3/4 of an ounce, or about 5 ounces per week. That's a little over 1 more serving of fish or shellfish per week or another helping of legumes like green beans, okra, snap peas, black beans, or peanut butter.