Improve your Cholesterol Score with Soy
I've written before about one of several nutritional studies on soy protein and its effect on LDL cholesterol (the bad stuff) and total cholesterol levels. A recent Canadian study in the American Journal of Clinical Nutrition (2006;83(2):244-51) theorized that isoflavones, a plant chemical with estrogen-like qualities, might be one of the significant factors in soy's association with reduced cholesterol levels.

Soy and Your Risk of Breast Cancer
Many cancer docs tell those women with estrogen-receptor positive breast cancer to avoid eating soybeans. Why? Because they contain a comparatively high level of isoflavones (phytoestrogens), which are naturally occurring chemicals that resemble natural estrogen. Soybeans (edamame) are a major source of protein in the Asian diet, and at least one study has reported that Chinese women who eat a lot of soy actually have a reduced risk of breast cancer. Which is right? 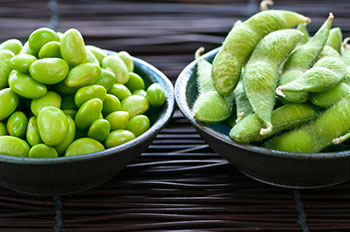 Readers of a certain age may recall the old rhyme:
"Beans, beans, they're good for your heart
the more you eat, the more you..."
We'll just leave it at that.

It's true that legumes, which include beans like black beans or Great Northern beans as well as soybeans, green beans, and okra, can help you improve your cholesterol scores and your blood pressure as well as reducing your risk of heart disease. Soybeans have been of particular interest because they are an important source of protein in large portions of the world's population. Consuming soybeans and processed soy has been linked with improvements in the elements of Metabolic Syndrome, and while there's been some concern that the phytoestrogens soybeans contain might increase the risk of breast cancer, the best research we have now indicates that eating more soy might actually reduce your risk of breast cancer.

Today's spotlighted research looks at soy intake and diabetes. Chinese researchers recruited nearly 65,000 Chinese women between the ages of 40 and 70 who lived in 7 urban areas in Shanghai, China to participate in the prospective (following people over time) study (Am J Clin Nutr 2008;87:162-7). At the start of the study, trained interviewers administered detailed dietary, health, and demographic questionnaires as well as measuring height, weight, and waist and hip circumferences. Women who had been diagnosed with diabetes, heart disease, or cancers were excluded from participation.

The authors analyzed the participants' intake of legumes in general and soybeans and soy products in particular and grouped that intake into five increasing levels of consumption. They then compared the diets of those who developed type 2 diabetes with those who did not, after taking into account such variables as Body Mass Index, Waist to Hip Ratio, physical activity, vegetable intake, total caloric intake, education, smoking status, and menopausal status.

The average Westerner is unlikely to consume as much soy as those who live in Asian countries. That said, it's clear that soybeans (also known as edamame) are great for you - but so are other legumes. Kids love to eat edamame in pods, steamed and sprinkled with a bit of salt, or try one of these Dr. Gourmet recipes to add some edamame to your diet.