Fiber
Fiber is what your grandma used to call "roughage." It's not one particular food, but it's simply the part of foods that your body can't digest. Fibers are technically carbohydrates, but your body doesn't have the enzymes to break them down like it does with sucrose. As a result, they're not absorbed and essentially have no calories.

Whole grains reduce your risk of Type 2 diabetes and heart disease
Metabolic syndrome, for those who might not be long-time readers of Dr. Gourmet's Health and Nutrition Bites, is a combination of abnormal lab results and body measurements that, taken together, lead to a greater risk of developing type 2 diabetes, heart disease, stroke, and heart attack. 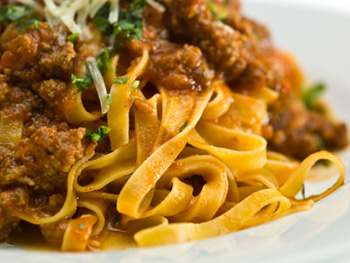 We know that more fiber in your diet is great for you: it helps improve cholesterol scores, reduces your risk of colorectal cancer, and helps reduce your risk of diabetes. More than its physical benefits, I talk often about how higher fiber foods are more satisfying. Yet most of that research focuses on whole grain breads, not pastas. A team in Copenhagen recently published an article that investigates just how satisfying whole grain pasta might be (Appetite 2016;107:152-158).

Fifteen overweight men and women participated in two studies for which they visited the research lab on four separate occasions. For both studies the researchers asked that the participants avoid all high-fiber and fermentable foods (such as yogurt) for the 24 hours prior to the four study appointments as well as avoiding any pre- or probiotic supplements. On each of the four test days the participants were provided with a standardized breakfast to be consumed at 8am along with up to 500ml of water, of which one cup might be coffee or tea.

For the first feeding study, the participants visited the lab on two separate occasions. They first consumed the standardized breakfast then ate a lunch meal consisting of pasta and tomato sauce. On one occasion the pasta was made of refined grains (white pasta), then on the other occasion the pasta was made of whole grains. The researchers asked the participants to eat their lunch meal until they were "comfortably full," and measured the participants' appetite with a questionnaire before and after the meal.

The second feeding study also required two visits to the lab and entailed the same standard breakfast. The lunch meal was again the same: on one occasion refined grain pasta and on the other whole grain pasta, both with tomato sauce. For this study, however, the authors served a standard volume for lunch, then tested the participants' appetite before lunch as well as at half hour intervals until 4pm, at which time they served another meal, this time a hearty salad.