How accurate is your wearable activity tracker?
I see a lot of people wearing those activity trackers, like Fitbits, Vivofits, or Misfits. Some are worn on the wrist, some can be worn at the waist, and some can just be carried in your pocket. An app on my iPhone tracks my steps and activity levels, and I can say that it's gotten me to be more active - competing with yourself can be a great motivator.

Exercise Really Is Key to Weight Loss and Maintenance
A couple of years ago I reported on a study that showed the importance of exercise in achieving and maintaining weight loss. At a minimum, the National Institute of Health and the Center for Disease Control recommend thirty minutes per day of exercise on most days of the week, or 150 minutes per week. Studies also show, however, that the difficulty is not really in losing the weight - it's in keeping it off for the long term. How much exercise is necessary to help maintain weight loss?

How to Suppress Hunger
Vigorous exercise is known to reduce appetite, at least during and immediately after exercising, but what we don't know for sure is why. Researchers have looked at various hormones (known as "gut hormones") associated with appetite regulation and there does appear to be a difference in the effects of different types of exercise on these appetite-regulating hormones. 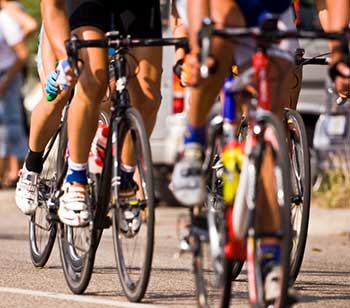 A patient told me the other day that exercise made her hungry, and the harder she worked out, the hungrier she was. She knew that she'd had a tough workout, she said, because her Fitbit told her that she'd burned more calories. There are two problems here: first, research shows that exercise actually reduces appetite for up to thirty minutes or more after exercise, and second, we also know that wearable activity trackers vary in their accuracy.

Certainly exercise is important for weight loss as well as weight management, to say nothing of its other health benefits. Yet many of my patients focus on its ability to burn calories, a viewpoint encouraged by many online diet and weight loss trackers, including those associated with wearable activity trackers. These will actually take into account the estimated number of calories burned through exercise: just the other day a patient told me that by cycling to work every day she effectively burned off her lunch, meaning she could eat more at dinner.

A team in Bristol in the United Kingdom decided to investigate the interaction between burning calories, subsequent hunger, and how much people chose to eat in response to that hunger (Appetite 2016;107:323-329). Seventy healthy adult men and women were recruited to participate in an exercise study in which they were asked to ride on a stationary cycle for about 15 minutes at a mild to moderate intensity of between 60 and 90 revolutions per minute. Each participant was directed to ride until the experimenter told them to stop, which was calculated individually so that each participant burned about 120 calories. The appetite and mood questionnaires were repeated immediately after the exercise and then again after the participant had rested for about ten minutes. Finally they were offered a snack of orange juice, tortilla chips, and chocolate chip cookies.

It's clear that the brain can override the body's appetite: the authors of this study called the effect "license to eat." Take your Fitbits and other wearable trackers' information about number of calories burned with a grain of salt, and remember that exercise is not an excuse to eat chocolate chip cookies (or whatever tempting item you've been offered).