Weight Loss Reduces Symptoms of A-Fib
While age is a strong factor in developing a-fib, overweight and obesity are also considered to be contributors, as obesity is known to affect the heart by causing such physical problems as enlargement of the atria (the upper chambers of the heart) and diastolic dysfunction (problems with the left ventricle's function during diastole, or the moment between contractions when the ventricle is filling with blood).

Caffeine safe for those with A-fib 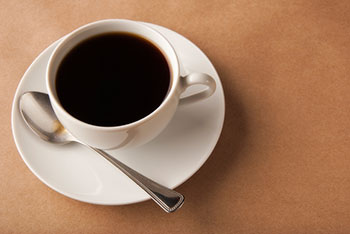 If you've been diagnosed with atrial fibrillation (a-fib), your doctor has likely told you to avoid caffeine. As I noted back in 2010, "it has never been truly clear whether caffeine has really had any real role in atrial fibrillation." That Health and Nutrition Bite reported on an observational study that looked at people's intake of caffeine and whether those who consumed more caffeine were at higher risk of a-fib: they were not. As an observational study, however, it can only look at association and must be interpreted with caution.

Not long ago I responded to an Ask Dr. Gourmet question regarding caffeine and the risk of atrial fibrillation (a-fib): "Caffeine probably does not cause a-fib but if one has had AFib attacks will Caffeine bring on another attack?"

I said at the time that while there had been no association shown, "the only way for us to know for certain would be to perform a randomized, prospective trial where one group with atrial fibrillation drinks coffee and the other doesn't. Comparing the two would offer us definitive evidence." Here's the good news: a study just published in JAMA Internal Medicine (doi:10.1001/jamainternmed.2016.6374) accomplishes exactly that.

Researchers in Brazil initially recruited 25 men and women with diagnosed heart failure who had implanted cardioverter-defibrillators (ICD) to participate in the study in the interest of safety in case episodes of a-fib were experienced. After the first round of trials, the authors recruited an additional 26 heart failure patients who did not have ICDs.

The participants were instructed to refrain from consuming any products containing caffeine for 7 days before the initial study date. On the day of testing, the subjects arrived at the lab at 8am, then at 9am they were hooked up to an ECG machine for monitoring and received their first dose of decaffeinated coffee along with a treatment capsule. Consuming the decaffeinated coffee and the treatment capsule repeated every hour until 1pm for a total of five doses, then at 2pm the participants participated in a standard treadmill test to assess their heart's function under stress.

The study was double-blinded: half of the patients received 100 milligrams of caffeine in their test capsule and the other half a placebo. Neither the patients nor the administrators of the study (or the cardiologist performing the treadmill test) knew which participants had received caffeine.

The outcome? "No significant differences in VPBs [ventricular premature beats] or SPBs [supraventricular premature beats; two different types of arrhythmias]... were observed between groups." The average heart rates were "indistinguishable" between the two groups, as well. The authors further analyzed the activity of the ICD in those who had them: again, no activity was recorded - the ICD did not have to pace the heart or administer shocks regardless of whether the subject consumed caffeine or placebo. In short, the authors report: "After 500 mg of caffeine administered over a 5-hour period, we found no association between caffeine ingestion and arrhythmic episodes, even during the physical stress of a treadmill test." That's pretty definitive.

The authors do caution that this is a small study, but it was performed in those at high risk of experiencing a-fib and was furthermore double-blinded and done under extremely controlled conditions. If you have a-fib and your physician has told you to avoid caffeine, print out this page and take it with you to your next visit to discuss it with your doctor. She may have other reasons for you to avoid caffeine, but it's possible that you could go back to enjoying your morning cup of coffee or tea - with caffeine.