Getting the balance right
We've seen in previous studies that eating red meat has been linked to breast cancer in women as well as colon or rectal cancer. Researchers at the University of North Carolina noted these results as well as those studies that link eating more fruits and vegetables with a reduced risk of these cancers. Similarly, some dietary patterns, such as the Mediterranean Diet, appear to protect against colon and rectal cancers.

More on good saturated fats
A few months ago the big news in nutrition (at least, as far as the national media is concerned) was that not all saturated fat is bad for you. We wrote about two studies that looked at different types of saturated fat: one discussing very-long-chain saturated fatty acids (a certain type of saturated fat), and another looked at the risk of diabetes associated with greater intake of high-fat dairy products and higher-fat unprocessed meats. 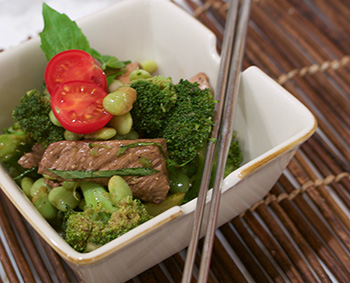 The research is quite clear that red meat is not something you should be eating every day. Too much red meat has been implicated in a greater risk of developing colon cancer, breast cancer, heart disease and diabetes, and an overall greater risk of death from any cause. On the other hand, we know that a higher intake of fruits and vegetables is great for you, reducing the risk of breast cancer, reducing the levels of inflammation in the body, and reducing your risk of heart disease, among many other benefits.

It would seem reasonable that eating more fruits and vegetables might counteract some of the increased risk of eating more red meat. (I certainly have patients who believe this.) Fortunately, a team of researchers in Sweden have recently published a study that sought to find out just that (Am J Clin Nutr 2016;104:1137-43).

The authors used data collected from two long-term large scale studies performed in Sweden: The Swedish Mammography Cohort, which for this research included nearly 35,000 women, and the Cohort of Swedish Men, which included just over 40,000 men. The participants responded to a dietary questionnaire at the start of their respective study, which allowed the researchers to analyze both their red meat intake as well as their consumption of fruits and vegetables. After an average of 12 years of follow-up, the authors were able to compare the diets of those who died from cardiovascular disease, cancer, or any other cause with those who did not.

The participants' red meat intake was broken out into processed meats such as hot dogs, bacon, salami, sausages, and ham, and unprocessed meats such as fresh or minced pork or beef. Relative intake was also grouped into five increasing levels of intake, from "never" to at least 3 times per day. Fruit and vegetable intake, on the other hand, was treated as one variable in three levels of increasing intake: Low (less than 2 servings per day), Medium (2-4 servings per day), and High (4 servings or more per day).

The authors' results with respect to red meat are consistent with previous research: for men, the more red meat they ate, the more likely they were to develop diabetes. For both women and men, those who ate the most red meat were 21% more likely to die from any cause than those who ate the least. This higher risk did not change when the authors took into account how many servings of fruits and vegetables people ate, however. That said, it was processed meats (as compared to unprocessed meats) that accounted for the majority of the risk: higher intakes of unprocessed meats were only associated with a slightly greater risk of death when they looked at the very highest levels of consumption.

Similarly, the highest levels of total red meat consumption (both processed and unprocessed) meant a 29% increased risk of death from cardiovascular disease, but this was not the case with respect to cancer: the authors saw no significant effect of red meat consumption either way.

One of the more interesting results from this study was that those who ate more red meat did not necessarily consume fewer fruits and vegetables than those who ate less red meat - meaning more red meat does not necessarily indicate a less healthy diet. It does, however, indicate pretty clearly that the risks of unprocessed red meats can't be overcome by eating more fruits and vegetables. Keep your red meat (that's beef, lamb, and pork - pork is not "the other white meat" regardless of what the Pork Association might say) lean and limit yourself to not more than once per week - and save the processed meats like hot dogs, sausage, bacon, and salami for treats and truly special occasions.