Fruit Availability Increases Consumption Beyond the Individual
As you are probably aware, most Americans don't eat enough fruits and vegetables, and there's been quite a bit of discussion of ways to get people to eat more. Increasing the amounts of fruits and vegetables that are actually available for people to purchase has been one of the most widely discussed strategies: decreasing so-called "food deserts" is one strategy that's received a lot of attention.

More Availability Does Not Necessarily Increase Consumption
There's been a lot of talk about "food deserts" - those areas, often in low-income neighborhoods, that are marked by a distinct lack of access to fresh foods. Larger grocery stores that offer fresh produce and meats are few and often only accessed by long trips via public transportation. Instead, the produce and fresh foods that are available are overpriced and found in tiny neighborhood markets that don't have the buying power for better prices or the turnover to keep those foods fresh and available.

It may be nearby, but....
In an article in Appetite, a team at the University of South Carolina noted that people's perceptions of what is convenient to them in their neighborhood may be very different from something's actual, map-measured distance from their home. Could this be the reason previous studies found little association?

Encouraging those on SNAP to make better food choices 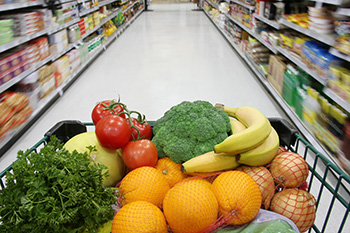 Overweight and obesity continue to be a worldwide health problem, and those most likely to be overweight or obese tend to be those with lower incomes. There's been quite a bit of discussion about why that might be, with theories ranging from a lack of access to healthier foods to cost. As we've seen in previous Nutrition Bites, limiting the number of fast food restaurants or increasing the number of supermarkets in low-income areas doesn't necessarily mean people will eat more fruits and vegetables. Nor is it really all that much more expensive to eat healthy than it is to go to McDonald's.

On the other hand, making fresh fruit available for free to low-income workers to eat during their lunch break meant that not only did they eat more fruit themselves, they actually purchased more fruit for themselves and more vegetables were served in their home. You may have seen other programs in the news recently, including the idea of "fruit and vegetable prescriptions" and a study that looked at providing financial incentives in the form of vouchers to those who purchased fresh fruit using their EBT cards at farmer's markets.

As you might expect, policymakers are interested in improving the diets of low-income individuals: healthy people contribute more to the economy and utilize health and social services less than those who are less healthy. A good bit of that discussion has focused on the food choices made by those on SNAP (Supplemental Nutrition Assistance Program, formerly known as "food stamps"), a benefit program that provides funding via an electronic benefits transfer card (EBT) that limits the SNAP user from purchasing anything with their benefits other than a fairly broad selection of foods that includes sweets, pastries, and sugar-sweetened beverages.

If financial incentives help induce people to purchase more fruits and vegetables, what if you excluded those sweets, pastries, and beverages from coverage? Would people choose more fruits and vegetables instead? A team of researchers based in Minnesota designed a study to test both financial incentives, restricting people's choices, and both together (incentives and restrictions) to see how people's consumption might change (JAMA Intern Med doi:10.1001/jamainternmed.2016.5633).

The authors note that "for legal reasons it is currently not possible to alter the practices of the actual SNAP program." To make their study as close as possible to the real thing, they recruited 265 families who were nearly eligible for SNAP or were eligible for SNAP but not actually participating at the time to join their study. The families were given debit cards, and every 4 weeks for the duration of the 12-week study the authors deposited the average SNAP benefit for the participants' family size on the card. To monitor usage of the card the participants were required to turn in their receipts for each time they used the card (those who misused the card were excluded from analysis).

The families were randomly assigned to one of four groups:

Control Group: This group was allowed to use their card to purchase the same items as are permitted on the actual SNAP program.
Incentive Group: For all of the fruits and vegetables this group purchased, 30% of the purchase price was refunded to the card and the cardholder notified of the refund by email or text. Standard SNAP purchasing restrictions applied.
Restriction Group: This group was allowed to purchase the same items as permitted on the actual SNAP program, with the exception of sugar-sweetened beverages (including soft drinks, fruit drinks, and sports/energy drinks), candy of any kind, and prepared sweet baked goods (such as pies, cakes, or cookies), which they were not permitted to purchase.
Incentive Plus Restriction: Both the fruit and vegetable financial incentive AND the prohibition on sugar-sweetened beverages, etc., as in the Restriction Group.

In the first and last weeks of the study the participants responded to 3 separate 24-hour dietary recalls, which allowed the investigators to assess not only fruit and vegetable intake and the intake of restricted foods, but also the participants' diet as a whole. The authors found that compared to those in the Control Group, those in the Restriction Group averaged consuming about 100 fewer calories per day (while the Control Group increased their intake by 80 calories), cut the added sugar in their diets almost 3 times more than the Control Group did, and slightly increased (by about 1/10 of a serving) their solid fruit score. On the other hand, they still drank about the same amount of sugar-sweetened beverages as they had at the start of the study and cut their intake of the restricted foods by only about .1 serving.

Those in the Incentive Plus Restriction Group, however, made some of the greatest changes to their diet: about 96 fewer calories per day, the greatest decrease in added sugars in their diet (about 9 times that of the Control Group), the largest decrease in consumption of Restricted foods, and the largest increase in the quality of their overall diet. They did not, however, improve their intake of solid fruit any more than the Incentive Group, and their intake of vegetables (when potatoes were included) actually decreased slightly (by .1 serving). Even when considered together, their intake of fruits and vegetables (excluding potatoes and fruit juices) did not increase as much as those in the Incentive Group.

One would think that the Incentive Plus Restriction Group would have eaten far more fruits and vegetables because they were given financial incentive to purchase them AND they were unable to spend that money on sweets and sugar-sweetened beverages. Yet they did not. Here's the problem: while there were a few single people in the study, the money on those debit cards was mostly used to purchase food not for an individual but for a family. The dietary questionnaires only covered the intake of the person actually doing the grocery shopping - not what their family ate. I'm not sure that it's fair to assume that what one person in the family eats is going to be representative of the diets of the whole family, so I would take these results with a large grain of salt.