Don't be misled by association
Sugar is a hot topic right now: it's the ingredient people love to hate. Concern about added sugars in foods is so great that the federal government is considering putting "added sugars" on its redesigned nutrition label, and that concern is so pervasive that I've received questions about the source of sugars in some of my recipes that contain no sugar-type ingredients such as honey, brown sugar, white sugar, or maple syrup.

When you don't know it's low sodium
Way back in 2011 I shared with you an article about reducing the amount of salt in bread. Breadstuffs are one of the largest sources of sodium in our diet, so a team in the Netherlands conducted what is essentially a blinded taste comparison of salt-reduced breads with standard breads.

Carrots really satisfy you
Studies have shown that fiber intake has a strong impact on satiety (the feeling of fullness and satisfaction after eating), but few studies have looked at fruits or vegetables specifically. Researchers in Dublin, Ireland noted that tested vegetable combinations that included more carrots seemed to yield greater satiety, and devised a study to investigate why.

The gap between daily and healthy 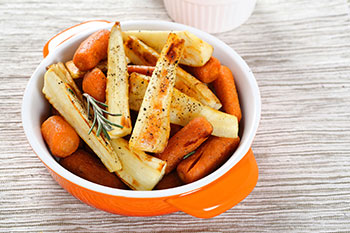 There's more information available than ever regarding which foods are healthy and what constitutes a healthy diet. All that information, however, doesn't seem to be making much of a dent in the health issues related to obesity or a poor overall diet, such as diabetes, high blood pressure, heart disease, or stroke. This suggests that there's a disconnect between what people actually eat and what they probably know they should eat.

That much is obvious, you might say. But do people really know what a healthy diet looks like, in practice? It's all very well to say "eat at least three servings of vegetables a day" when people might not know what counts as a vegetable (corn doesn't, for example), or how big a serving of vegetables is (about 4 ounces, or about 1 cup sliced yellow squash or zucchini).

Researchers in Switzerland used a fake food buffet to gauge people's perceptions of a healthy diet (Brit J Nutr 2016;116:559-566). In a buffet setting the authors presented a wide variety of foods commonly eaten in Switzerland, using highly-realistic plastic representations of all perishable foods. The nearly 180 represented foods were carefully selected by dietitians to achieve a balance of healthy and unhealthy foods. Each participant was asked to choose foods from the buffet that would represent all of the foods they would eat in one day and place those meals and snacks on an adjacent table for recording. Half the participants were asked to choose the foods they would themselves typically eat in a day, while the other half were asked to choose foods for "a healthy and balanced diet for themselves."

The authors could then estimate the number of calories each person would have (presumably) consumed, along with the amount of total fat, saturated fat, protein, carbohydrate, sugar, and fiber (among other nutrients). Before the start of the study the authors surveyed the 187 participants to determine each person's individual caloric requirements according to a formula that took into account height, weight, and activity level.

Generally speaking, all of the participants selected slightly fewer total calories than were required for their individual caloric needs. That said, those who were choosing foods for their usual diet tended to choose foods that were much higher in saturated fat and sodium while being far lower in fiber than the selections made by those who were choosing a healthy diet.

What was surprising, however, was both groups' choices were far higher in sodium than the Swiss government's recommendations for a healthy diet by almost 1.5 times. Similarly, both groups' chosen foods were far higher in sugar. The Swiss government recommends that their citizens get less than 10% of their calories from sugar, but both groups' sugar intake was over 20% of total calories. The source of that sugar was different, however - the source of the sugar in the typical diet group was more from sweets and sugar-sweetened beverages, while the healthy diet group's sugar tended to come from fruits and fruit juice.

The good news is that those choosing a healthy diet tended to choose fewer sweets, salty snacks, fast foods, flavored yogurts, sausages, and croissants than the typical diet group, and chose more nuts, olives, cheese, and salad dressings. Neither group, however, consumed the recommended three servings of vegetables per day.

The authors interpret these findings to mean that most people have a good idea of which foods are considered healthier choices. They do not, however, have a good understanding of what a typical day's meals should look like within the context of a healthy diet: 60% of the dietary recommendations that the Swiss government makes with respect to a balanced diet (think the US government's MyPlate or Food Pyramid guidelines) were not met by either group.

It's a bit unrealistic to expect that one will meet governmental guidelines for a healthy diet each and every single day. This is why, when we talk about your Mediterranean Diet score, we talk about averages over the course of a week. That still means making healthy choices far more often than unhealthy ones, and doing that on a consistent basis for the long term. Take the Mediterranean Diet score quiz and find out where you might improve your score - improving your score by just 2 points can reduce your risk of death from all causes by 25%.