Those 100-Calorie Snack Packs
We know from previous research that when people eat from larger bowls or plates, they tend to eat more than those eating the same food but from smaller plates. That's one reason that the food industry has introduced those 100-calorie packs of snack foods. The idea is that if you eat from these smaller packages, you'll eat less.

The little things do matter. (A lot!)
Think you might be influenced by a pretty label on a package? Nah... not me! Dr. Brian Wansink says that you are, and the subtle clues that contribute to not just what we consume but how we view it make a tremendous difference in how we eat.

The key to counting calories: portion size!
There has been research reporting that those who are overweight will generally underestimate they number of calories that they eat. This has often been cited as one of the contributing factors to the increasing issue with overweight and obesity. Brain Wansink and Pierre Chandon, at the Cornell University Food and Brand Lab, set out to challenge this view. 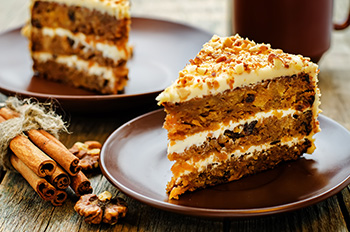 In April I shared with you a study that compared the effect of different labeled serving sizes on what people believed were reasonable serving sizes as well as how much of that food they believed they would eat. While the respondents believed the foods labeled with larger serving sizes to be less healthy than the same food with a smaller serving size, they were basing that belief on reading the nutrition label the authors of the study provided. I'd like to think that you, as Dr. Gourmet readers, look carefully at the nutrition facts label on the food you eat, but you would be the exception: think about the times that we here at Dr. Gourmet have overlooked the "servings per container: 2" on frozen meals.

Brian Wansink and his team at Cornell approached the issue from a slightly more real-world approach: looking at what is actually depicted on the front of the box (Pub Hlth Nut 2016;19(12):2128-2134). Many packaged foods have pictures on the box that show more than just what is in the box: cereal is shown with milk, or Hamburger Helper with ground beef. Wansink and his team chose to use cake mixes, which often show the finished cake with frosting (and plenty of it). Would people take that frosting into account when looking at the cake mix box and deciding on what they thought was a reasonable serving?

In the first of four studies, the authors first calculated the number of calories in the slice of cake shown on 51 different boxes of cake mixes from three different major brands (Duncan Hines, Betty Crocker, and Pillsbury). Assuming an 8-inch cake pan, they measured the angles of the wedge of cake shown on the box and were able to estimate the amount of cake shown. Similarly, they could also estimate the surface area of that wedge of cake covered in frosting, and assuming an average type and thickness of frosting, they could estimate the number of calories of frosting that was shown on the box.

It shouldn't surprise you that since the frosting wasn't included in the Nutrition Information on the boxes, the average slice of cake displayed, including frosting, contained on average about 135% more calories than was listed in the Nutrition Facts for the cake alone. Duncan Hines was the worst culprit, with a piece of frosted cake on its packaging that contained more than twice as many calories as the recommended amount of cake alone.

In a second study 45 undergraduates were shown two packages of cake mix and asked to estimate the number of calories of cake alone that would be a reasonable serving. Fifteen of the students were told that "the frosting shown on the front of the packaging is not shown on the nutritional labeling," while another fifteen were not given that information about the frosting. The final fifteen students were given the same boxes with the pictures altered to show pieces of cake without frosting, but were also asked to estimate the appropriate number of calories in a serving.

The third and fourth studies the authors performed were essentially the same, differing only in the respondents: the first iteration was performed in undergraduates, while the second was in food service professionals, who one would think would be more nutrition-facts-savvy. Individuals were shown a box of cake mix whose picture included the frosting, as well as an actual cake made from that mix, also with frosting, that had been pre-cut into slices of varying sizes, from very small to very large. The participants were instructed to choose the slice of cake that represented the amount they would serve themselves. Some of the participants were told that the nutrition information on the cake mix box included the frosting, while others were not. Once again, those who were not explicitly told that frosting wasn't included in the nutrition information chose larger slices than those who knew the frosting wasn't included - and this was true for both food service professionals as well as undergraduates.

It's clear that the picture on the box can influence your perception of a normal or reasonable portion and trick you into thinking that extras like syrup and butter (as for pancakes) are included in a product's nutrition information. Be a smart consumer and read the nutrition information carefully so that you know exactly what the food manufacturers are considering a serving: is it really the same thing shown on the box?