Mediterranean Diet and Quality of Life
We know that following a Mediterranean style diet can help prevent a number of chronic diseases and conditions - from improving insulin levels and cholesterol scores to preventing heart attack and stroke. But health is more than just lack of disease - it's also about quality of life.

Being overweight decreases positive effects of high-fiber diet
Back in January I wrote about C-reactive protein (CRP), a blood marker of inflammation, which is related to chronic diseases like heart disease, diabetes, and cancer (Overweight? Here's another reason to lose the excess, 1/12/07). Several other studies have suggested that one way to control the levels of CRP in the bloodstream is diet, particularly a high-fiber diet.

Can you be healthy and overweight?
The research I'll be discussing today really got people's attention: the editor of theAnnals of Internal Medicine set the tone by writing an editorial titled "The Myth of Healthy Obesity." It's the secondary results of this study that I find even more interesting, however. 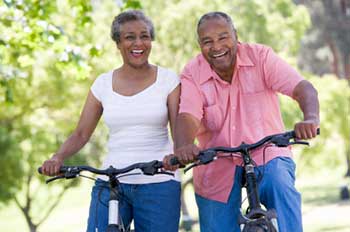 There has been quite a bit of discussion on weight status and health in the elderly. Some say that a little extra weight (being clinically overweight) will help older men and women live longer, as elders are at greater risk of being underweight due to loss of muscle mass - often from not eating properly. Back in 2007 I wrote about a study that suggested that compared to those with a clinically normal Body Mass Index, both men and women who were over 65 and overweight had the lowest risk of overall mortality but only a slightly increased risk of disability.

In that article, "disability" was measured by asking the participants if they could perform the following functions: bathing, grooming, dressing, eating, using the toilet, walking across a small room, and transferring from a bed to a chair. These are very specific and objective measures that almost anyone would consider a sign of poorer health. But what about the more personal and subjective assessments of health? Feeling that one is in poor health impacts one's perception of one's quality of life - and that's something that becomes more important as one ages.

From 1996 to 1991 the participants reported their height and weight and rated their own health as "excellent, very good, good, fair, or poor" every three years. From 1991 to 2013 the participants' reporting was increased to every six months. The authors did not ask about specific measures of ability or disability - just the women's overall perception of their health.

For the purposes of their analysis, the authors grouped the health responses into "good" (a response of excellent, very good, or good) or "poor" (fair or poor), then used sophisticated software to model each woman's Total Life Expectancy as well as the number of years they might expect to spend healthy (Healthy Life Expectancy, or HLE) or unhealthy (Unhealthy Life Expectancy, or UHLE). They then could compare the TLE, HLE, and UHLE for women who were of normal weight, overweight, or clinically obese - as well as looking at those women who lost weight over the course of the study.

Compared with those who felt their health was "poor" at the start of the study, those who rated their health as "good" had greater numbers of healthy years, regardless of their Body Mass Status at the start of the study. Women who were overweight or obese were more likely to see their overall health change from "good" to "poor" over the course of the study, while underweight women were no more likely to see their health status change than those of normal weight. Finally, those obese women who reduced their Body Mass Index did see their Total Life Expectancy as well as their Healthy Life Expectancy increase slightly.

This study underscores the importance of maintaining your overall health as you get older, including a normal body weight. If you are overweight or obese once you hit your 60's or 70's, you can still improve your health and your overall quality of life by working on your weight. Talk to your physician about a referral to a dietitian, who can help you design an eating plan that will help you maintain lean muscle mass while reducing your Body Mass Index.