Alcohol in a Mediterranean Diet
I get questions from patients all the time about whether it is safe or healthy for them drink alcohol. The short answer is yes, but first and foremost, drinking too much alcohol is bad for you. Even so, the best research we have shows that those drinking between 2 and 2 1/2 drinks per day for men or 1 to 2 per day for women live longer.

Alcohol-free beer: an antioxidant?
Reading the academic research articles that we then write about here at Dr. Gourmet is not what I'd call reading for pleasure. They're interesting, of course, but a bit dry, as I'm sure our Health and Nutrition Bites are. Now and then, however, I do come across an article title that is so interesting that I just have to read it. Today's article is one such: "Effects of alcohol-free beer on lipid profile and parameters of oxidative stress and inflammation in elderly women." 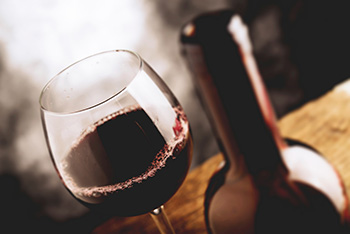 If you've been following Dr. Gourmet for a while, you probably know that alcohol is one of the nine points of a Mediterranean-style diet. Research has shown that those who consume a moderate amount of alcohol, mostly with meals, are less likely to develop diabetes or heart disease than those who do not consume alcohol, while those whose intake is excessive (4 or more drinks per day for women, or 4 1/2 drinks per day for men) are almost twice as likely to develop diabetes. One theory is that it's the antioxidants in wine that confer the protective effects, although we also know that all types of alcohol (wine, beer, or liquor) help reduce the markers of inflammation that are associated with chronic conditions like diabetes, heart disease, and cancer.

That said, the risk of developing gastro-esophageal (esophagus and stomach) cancers is slightly (just 1%) higher among those who drink. A new study in the American Journal of Clinical Nutrition looks at alcohol use and survival in those diagnosed with colorectal cancers (2016;103:1497-506).

The authors used information gathered through an ongoing case-control study in Germany. (A case-control study compares those who have been diagnosed with a disease with those who do not have the disease in an effort to discover possible contributing causes of the disease.) Over 3,000 men and women who had recently been diagnosed for the first time with colorectal cancer (CRC) responded to demographic, medical, and lifestyle history questionnaires that included estimates of the participant's alcohol intake, both in the past (at ages 20, 30, 40, etc.) and within the year just prior to their diagnosis.

The authors found that compared to light drinkers, those who abstained from drinking any alcohol over their whole lives had lower rates of overall five-year survival (meaning they did not die of any cause) and much lower rates of CRC-specific survival (dying from colorectal cancer specifically). On the other hand, compared to light drinkers, heavy drinkers also had lower rates of overall survival and were far less likely to survive disease-free for the five years of follow-up. This tendency for abstainers and heavier drinkers to fare less well than those who were light or moderate drinkers held true across the various outcomes the authors considered, from risk of recurrence to risk of death from CRC.

Case-control studies are always retrospective, and in this case asks the participants to estimate their past intake of alcohol. Given that all of the participants had been diagnosed with colorectal cancer, it's possible that their recall was less than accurate: they may have unconsciously under-reported their alcohol intake due to the stigma associated with regular drinking. This study does, however, mirror the other positive effects of moderate alcohol intake and should be considered all the more reason to keep your drinking moderate (and with meals). As always, if you abstain from drinking this study should not be taken as requiring you to start.