What's your personal portion size?
I've spoken and written extensively about portion size and the importance of portion control in weight management. This is partly in response to what is often termed "the super-sizing of America," but it's not just restaurants where portion sizes have blown up in the last several decades. Brian Wansink and his team discovered that the portion sizes in such beloved cookbooks as The Joy of Cooking have also increased. That means that for a lot of people, they have no idea what an actual portion size should be - because they've probably never seen one.

More on the plate means more in the tummy, grownup version
Serve more, eat more: it's clear that larger portion sizes have contributed to the rise in obesity. As we saw back in 2007, this is true for kids, too, who ate 1/3 more food when presented with twice the portion size. One of the ways to combat this is to choose foods that are lower in energy density (that is, have fewer calories for greater volume).

The impact of larger serving sizes 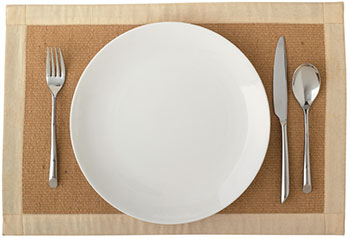 You've no doubt heard that the U.S. Food and Drug Administration (FDA) is planning to change the Nutrition Information label that is required on nearly all foods. One of the ways they're considering changing it is in the area of portion size. The Nutrition Labeling and Education Act of 1990, which first required the the Nutrition Label we have now, had its portion sized based on "Reference Amounts Customarily Consumed" (RACC), which means that portion sizes are to be based on what people actually eat, not what they ought to eat. The problem is that these RACC are based on surveys conducted in 1977-78 and 1987-88 - and as you probably know if you've been reading Dr. Gourmet's Health & Nutrition Bites for a while, portion sizes have increased in the last several decades.

There's been some concern about the effect that increasing labeled serving sizes might have on what people eat. I've given frozen food companies a hard time in our food reviews when they label what is clearly a single-serving package as containing two servings - it's simply too easy for people to overlook the little "servings: 2" on the package and believe that the number of calories you're consuming are the same as those listed on the box - and not 2 times what's listed. The outcome of that sort of labeling disengenuousness leads all too easily to consuming more calories than you should.

On the other hand, what people actually eat can also be affected by the size of the package overall as well as the size of the bowls or plates people use. A team at George Washington University designed three smaller surveys to look at people's perceptions of serving sizes in relation to the portion size listed on the packages of various foods (Appetite 2016;101:71-79).

In a second online survey of almost 350 people, different foods were used but their accompanying nutrition labels were again presented with either standard or larger serving sizes. In this case the participants gave their opinion regarding the foods' healthfulness, then indicated the amount of the package they personally would eat by clicking on the package to indicate the fraction of the package.

In the third and final study, nearly 200 undergraduate students participated in unrelated research, but as a thank you were told they would receive a reward of M&M's in addition to the usual course credit. The participants were shown the nutrition label for the M&M's and were required to report the number of calories along with the amount of fat and sugar listed (to ensure they actually read the label). Half of the labels showed a standard serving size, while half showed a serving size double the standard. The participants were then given a pre-weighed amount of M&M's in a bowl and allowed to eat as many as they wished. The amount they actually consumed was then recorded by the researchers.

The authors interpret these results to mean that larger serving sizes listed on the package might mean that people would consume less, both because larger serving sizes are seen as less healthy and by leading people to overestimate the number of calories they are likely to consume. Your take-home, until the FDA completes its review of and finalizes changes to the Nutrition Information box, is that it's important to know what recommended serving sizes of various foods actually are (here's a guide), and to read the Nutrition Information label carefully and consider whether the amount you're going to consume is accurately reflected in the portion size on the label. If it's not, you'll need to do the math.