Eggs OK for Diabetics, Too
Sometimes it still seems to be an uphill battle to let people know that for the vast majority of people, dietary cholesterol (the cholesterol in your food) has virtually no effect on your cholesterol scores. Every now and then I still get an Ask Dr. Gourmet question about the cholesterol in a recipe, but the good news is that the word does seem to be getting out that eggs are good for you.

Eggs and your risk of diabetes 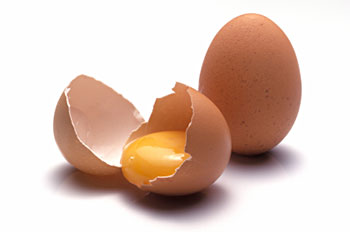 Egg intake continues to be a concern among researchers who are examining individuals' risk of developing diabetes. Just last year I reported on a long term, prospective study of over 2,300 men in Finland that concluded that those who ate 3-4 eggs per week were actually less likely to develop diabetes than those who ate less than 1 egg per week. Another study from Australia, with over 120 diabetics and pre-diabetics participating, found that those who ate two eggs at breakfast every day for three months had the same changes in their cholesterol and hemoglobin A1C (HbA1C) as those who ate less than two eggs per week: none.

Other studies showed an increased risk of heart disease or stroke in those with diabetes who consume eggs. Since eggs have such high amounts of cholesterol, the concern continues that consuming eggs may therefore indirectly increase the risk of diabetes. In an attempt to tease out the connection (if any), a team of researchers at Harvard Medical School and Mercy St. Vincent Medical Center in Ohio (Am J Clin Nutr 2016;103:474-80) analysed the data from 12 prospective studies, performed worldwide, that together included over 219,000 people who were followed for at least 5 and as many as 20 years from the start of the study.

The authors looked at those participants with the lowest levels of egg intake and compared their rates of developing diabetes with those whose levels of egg intake were the highest. Even after taking into account such dietary factors as fish and shellfish intake (another major contributor of cholesterol to the diet), or their intake of meat, vegetables, coffee, calcium or magnesium, rice, and soft drinks, they found that there was no statistically significant greater risk of diabetes when consuming less than 4 eggs per week. Indeed, consuming 4.6 eggs or more per week increased the risk by only 7%.

Interestingly, when the authors looked at only the studies done in the United States, the results were quite different: 3 or more eggs per week appeared to increase the participants' risk of developing diabetes by 39%.

Why the difference between the studies done in the United States and the rest of the world? The researchers theorize that rather than the eggs themselves alone, the effect might be due to what people eat with their eggs, which here in the US is often processed meats, such as bacon or sausage, and high-fat foods, like butter and cheese (and bacon and sausage). This would tend to support the more recent consensus that you should be more concerned about the saturated fat in your diet than your dietary cholesterol. In short, you can have your eggs in moderate amounts - but minimize the butter you cook them in. Try frying or scrambling them with a little olive oil for a light, savory flavor.